Opinions are mixed when it comes to Registry cleaners. Some say that these programs are like snake oil, that do not really improve anything after they have been used to clean up the Registry. Others notice improvements, for instance in start up speed as the size of the Registry often gets reduced as a consequence if the Registry optimizer defragments the Registry after operation.

While you may get improvements in start up speeds, cleaning stray files or invalid entries usually does not have an effect on the system. Even worse, if programs identify keys improperly, it can lead to all kinds of issues afterwards. That said, there are still situations where you may want to run a Registry cleaner, for instance when the uninstallation of a program did not complete successfully and resulted in some weird behavior of the operating system.

Eusing Free Registry Cleaner 3.0 has just been released. It promises to make the computer faster and improve overall PC performance and stability. While that may not be the case for all systems it is run on, running it should not have any ill-effects on the system either as it comes with options to create a full Registry backup and restore any chances made during program use. 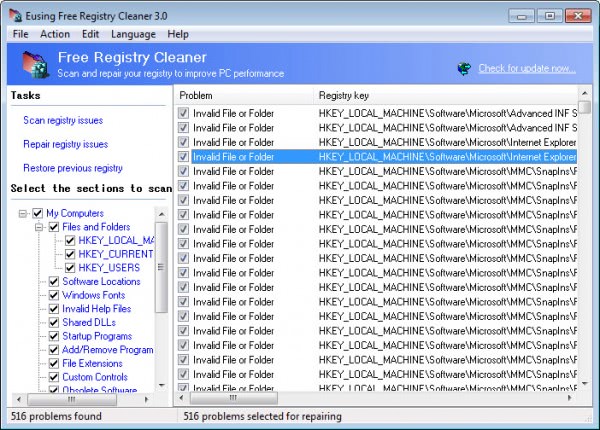 I suggest you create a Registy backup first before you start to use the program. If you can, create a system backup as well to be on the safe side. When you first start the Registry cleaner you will notice the task list and sections on the left side of the screen. The sections let you pick specific locations or items, like startup programs, fonts or obsolete software, that you want scanned in the Registry.

A click on scan registry issues starts the scan which should take less than a minute to complete. All issues found are displayed after the scan on the right pane. Here you can verify the issues and uncheck problems that you do not want the program to resolve during clean up. You find an option under Edit to save all the program's findings to a text document for safe keeping or further analysis. A click on repair registry issues removes the invalid entries from the Registry.

As far as additional features go: you can restore previous optimizations in case something went wrong, e.g. a program that you rely on is not starting anymore, and add values or keys to an ignore list so that they are never deleted from the Registry when the program is used.