Applications that let you tweak your operating system are useful right after you have started the system for the first time to customize it the way you want it to be. They can however be also helpful later on, when you run into a issue that you want fixed. Tweaks are usually provided in an easy to use fashion, for instance as checkboxes, which is way more comfortable than having to edit settings in configuration files, the Windows Registry or deeply nested menus.

When you first start the program after installation, you will immediately notice that it has a lot to offer. A left sidebar menu divides tweaks into categories such as UAC Settings, Security Settings or Explorer and Start Menu. Most settings can be enabled and disabled with a click in the corresponding checkbox. Sometimes sliders or selection menus are offered instead. 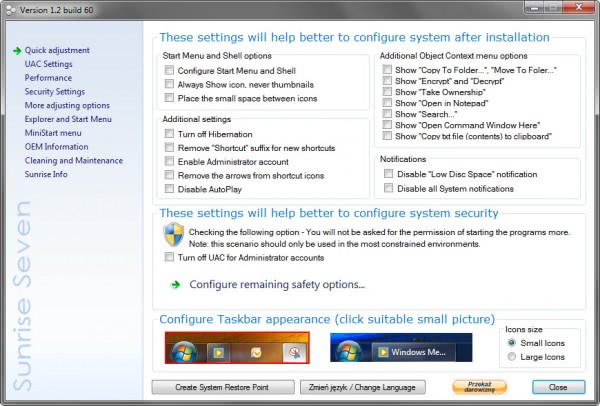 Tweaks are applied right away once you make a change in the program interface. It is recommended to create a system restore point - the option is listed at the bottom of the program window - and a system backup to be on the safe side of things.

The program offers some tweaks that I have not seen in a lot of other tweaking applications. You can for instance change the width of the right and left side of the start menu, change the Taskbar color, or to turn on the system's DreamScene feature.

It offers to make a lot of changes that you'd expect a program like this to support. From changing the system's OEM information, over turning off features like AutoPlay or Hibneration, to disabling security related features and disabling services. 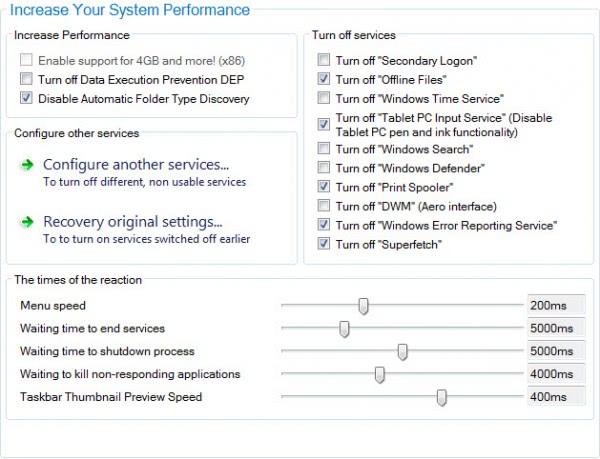 All in all a solid software for Windows 7 users who'd like to tweak their operating system. A few menu items and headings have not been translated into English, which is the only issue that I ran into when using the software.

Great software for 32-bit and 64-bit editions of Windows 7 that needs a bit of polishing. (via Mike)