Which is the Best Tablet Form-Factor - Review

In the last year I've reviewed and owned a fair number of tablets covering just about every aspect of the market.Â  These have included the monster 12 inch ASUS EP121 complete with a Core-i5 processor and 4Gb of RAM down to my latest arrival, a 7 inch Blackberry Playbook.Â  But what is the best size and form-factor for a tablet?Â  Having used a fair few now I thought I'dÂ share my thoughts with you on what the different screen sizes mean in terms of usability, weight and portability.

The first thing I need to say here is thatÂ personal choice comes into this in a sizable way.Â  I for instance like using large computer screens, 23 inch and above, on which I can see complete web pages and other programs and documents simultaneously.Â  I extensively use Windows 7's Aero Snap feature which allows me to pin programs and documents to the left and right of my screen so that I can compare them.Â  That's when I'm working however.Â  A tablet for me is something that I will commonly use lounging on the sofa or sitting on the train.Â  It's purely an entertainment device and, currently, will only beÂ used for checking my email, a little light web browsing and gaming.

Weight and portability will also factor in largely depending on your own personal view.Â  Some people won't mind having a slightly larger and heavier tablet with them as they commonly carry a bag that suits it.Â  For other people who might carry a smaller bag, or dislike such things, then portability and even pocket-ability is a major factor.

In the image below you can see three different tablets.Â  The 11.6 inch EXOPC Slate running the Windows 8 Consumer Preview, the 9.7 inch HP Touchpad running WebOS and the 7 inch Blackberry Playbook running QNX.Â  This will not be a review of usability of the individual devices and their operating systems, just of their size, weight and form-factor.Â  So which do I prefer and why? 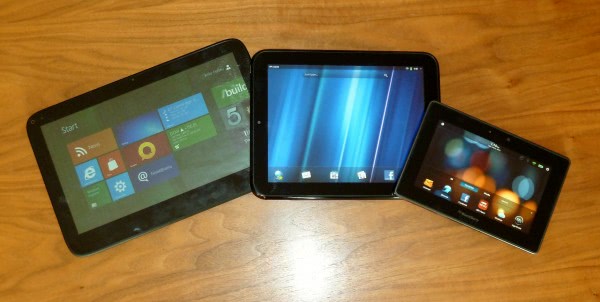 Clearly if you are using a tablet for light duties anything above a 10 inch screen is going to make for a weighty machine that you simply won't be able to hold comfortably in one hand.Â  The EXOPC weighs in at around one and half kilos and the ASUS EP121 was just as heavy, if not slightly more so.Â  I would say that these tablets aren't for using casually or for travel.Â  They are for people who take their computing seriously and want a tablet they can actually do some work with.Â  I've seen people using iPads with docks and bluetooth keyboards on trains and it can safely be said this is by far the best way to use a tablet over the size of 10 inches.Â  In a way this actually negates the point of it being a tablet as it's easy to argue that adding a keyboard to a tablet turns it into a laptop, or at least means that it suddenly isn't a tablet any more.

So what of the 10 inch tablets.Â  Now this category includes many Android machines and also, most famously Apple's iPad and iPad 2.Â  It is in this arena that Apple are on to a winner as weight does become an issue.Â  You might remember Steve Job's address when he first unveiled the iPad.Â  Many people criticised him for resting it on his knee while he was working on it.Â  While this might have been necessary it still remains that the iPad and iPad 2 are two of the lightest tablets available in their class.Â  The HP Touchpad, seen above, is almost a third heavier than the iPad 2 and it shows.Â  In use I almost always have to rest it on something when using it, but as I'm usually relaxing on the sofa it doesn't really bother me.

On the plus side, that 10 inch screen does allow me to see an entire web page or a whole document at one time.Â  There's no swiping and scrolling around all the time so that I can read everything.Â  This is a huge plus for people who just want to be able to relax with their devices.Â  This form factor is really very portable too, though you'll quickly notice the bulk when carrying it in your luggage for a trip away and for using it on a train.

One of the reasons that 10 inch tablets are more bulky is that this is the size of tablet that still uses the traditional 4:3 screen aspect ratio.Â  It's very true that this allows you to see much more at one time, but if you're after an entertainment device to, for example, watch movies then you will be using electricity to power parts of the screen that won't be doing anything.Â  If you're in an airline seat too this aspect ratio can get in the way and make what is in effect a small device suddenly feel bulky.

So it must be the 7 inch tablet then that wins?Â  Well, let's not be too hasty as while these machines are certainly small and light, some will even fit in an 'oversized' jacket pocket, that small screen isn't very suitable for today's modern web browsing.Â  You will find yourself scrolling around a lot to read the information you want, though in portrait mode they can make excellent eBook readers, being the only tablets you can comfortably hold with one hand.

One major advantage of the 7 inch tablets is also one of their largest failings.Â  I feel with the Playbook that if I go out, perhaps to walk the dog, I want to take it with me and carry on web browsing while walking round the common or sitting on the bus.Â  Alas far too few tablets these days come equipped with SIM card slots and this is where these 'mobile' devices begin to fail.Â  If you're after a tablet, whatever size you want, I would strongly advise getting one that's 3G or even 4G enabled.Â  Mobile data costs are plummeting and a device such as this, unless you watch video on it, will use much less data in general usage than you might expect it to.

I firmly believe that all mobile computing devices these days should support mobile broadband, it's a no-brainer given how we now work and play.Â  It is a shame though that too many manufacturers don't include this, or charge significant premiums for it, when it's such a cheap and accessible technology.Â  My EXOPC for example didn't come with it, but the company fitted it for me for just Â£40 (around $55).

It's this lack of portability on some 7 inch tablets that makes me ask why I should use thatÂ if I'm going to be tied to my home, why shouldn't I use a 10 inch tablet instead?Â  For this reason I believe the 10 inch tablets are the overall winner, and clearly Apple believe this too as they currently make no other sizes.Â  If you can get a 7 inch tablet with a SIM card slot then I would advise to think seriously about it, but if a SIM card slot isn't available, or is out of your budget, then 10 inch is definitely where the best value for money lies.