Last year I picked up an HP Touchpad in the fire sale that resulted in the model, and all of HP's tablet plans,Â being discontinued.Â  Now RIM appear to be doing similiar with their Playbook tablet, with prices being slashed around the world.Â  You might think then that now would be the right time to pick up your first tablet, after all a great many people believe that tablets generally are just too expensive at the moment for what they offer.Â  I thought then that I'd review the Playbook and give my verdict as a seasoned tablet user.

I've used quite a few tablets in the last year, and indeed I now own three of them (don't ask!) including the Touchpad and now the Playbook.Â  So which is better and how does RIM's model stack up against the competition?

The Playbook does have certain advantages over the competition however which start with a micro-HDMI socket and include extras such as a touch-sensitive bezel, clearly labelled controls on the outer edge and two cameras, a 3MP affair on the front and a healthy 5MP camera on the rear.Â  This is compared to the woeful 1.3MP webcam on the Touchpad.Â  The battery life on the Playbook is also excellent, being a match for the Touchpad, but perhaps not the huge battery life of the iPad 2. 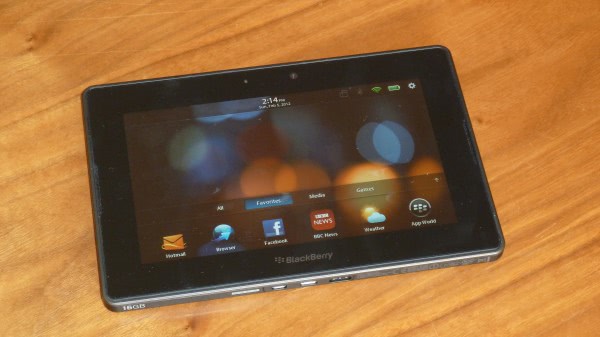 The screen is excellent but the resolution is only 1024 x 600 and this results inÂ a fair amount of scrolling being necessary in order to read a full web page or document.Â  The included software bundle is generally speaking bog standard with apps for the camera, mapping (using the on board GPS which doesn't work anywhere near as well as the TouchPad), music and music store, video (and YouTube), pictures, video chat (but only with other Playbooks which seems pointless), Calculator, Adobe Reader, Weather, Facebook, Twitter, Hotmail and Gmail (the last three are simply links to the relevant websites), app storeÂ and voice notes.Â  There is also DataViz' excellent Documents to go for creating and editing Word, Excel and PowerPoint files.

I encountered a significant problem with my Playbook however in that these apps aren't delivered in flash memory with the OS itself but are rather downloaded from the cloud and Rim's own servers.Â  The update server was down when I got my machine and so for almost an entire day my tablet had nothing more on it than the web browser.Â  This is the achilles heel of RIM's services as their servers do seem to go down with some regularity.Â  To have a hardware device that you've bought and paid for so tightly integrated with the company's own servers is something of a worry.

The software is missing a few key apps.Â  There are currently no native email and calendaring apps (though these are coming later this month with the next OS release so this shouldn't put you off buying one) and the machine and screen lock feature doesn't work properly, it asked me for a password every time I turned the machine on even though I had told it to only lock after 30 minutes.Â  Hopefully this is something else that will be sorted out.

The app store is well stocked but not quite as well stocked as I might have hoped and it can be difficult and fiddly to navigate and find what you want.Â  I thought the app store on the Touchpad was fairly barren but the Playbook's store is not much better.

With the OS itself I found some simple tasks, such as closing a browser window, took two actions where on other devices they would only take one, and the left-right swipe action needed to select a running app on the home screen to open was often over-zealous and swiped straight past the one you wanted.Â  Despite these niggles though the OS is certainly polished, very fast indeed and very responsive.Â  I really like it.

One of the problems I faced with my Touchpad was being unable to hold it in one hand when using it, it's just too heavy and bulky for that, as is the iPad.Â  I was hoping then that a smaller 7 inch tablet would solve these problems.Â  Alas it's still just a little heavy and left my hand aching between my thumb and forefinger after holding it for moderate periods.Â  Resting it on the knee doesn't work too much either as it's just too small for that and suddenly you find it's too far away.Â  It can also get a little hot in extended use.

You might think then that I don't like the Playbook and wouldn't recommend it.Â  In fact quite the opposite is true.Â  For the problems and niggles there is also much to like.Â  RIM's QNX operating system is very similar to WebOS in many ways, almost always in ways that make it intuitive and simple to operate.Â  It's nice to see that RIM have put a great deal of focus on ease of use and they've certainly succeeded.

It is very small and light too, so if you're looking for something to use on the daily commute this won't get in the way and will be very comfortable to use in an airline seat too, where larger tablets can be too big.Â  I'd have liked to have seen a 3G/4G slot on something so portable, and this is a complaint I commonly make about tablets and laptops, but for these new super-cheap prices I couldn't really complain.

It's this new low price though that really sells the tablet to me.Â  In build quality, form factor and weight it's every bit the competitor to Amazon's new Kindle Fire tablet, but now it also competes keenly on price.Â  With that excellent screen it's a very capable eBook reader but doesn't have the Amazon Kindle-store-focused front-end.Â  If you're after your first tablet you won't get any better for the price.Â  If you want a tablet to use seriously though and don't mind spending more, then you might be better looking at the available Android machines.