How RIM Spoiled my first day with a Playbook

I received a new Blackberry Playbook 16Gb tablet today, actually it's not completely new as it's two weeks old and was owned by a family member who bought it because prices had been discounted recently here in the UK.Â  She liked it so much that she decided she'd rather have the 64Gb one and bought that, giving me her 'old' tablet as she felt I was perhaps spending too much time with Windows (on this I did point out I didn't own an iMac but this was just met with a "nice try" comment).

I was excited about its arrival today.Â  I already own an HP TouchPad that I picked up in last year's fire sale and I love WebOS.Â  It is an extremely friendly and usable OS but, alas, sometimes the 10 inch form factor is a little large and the TouchPad weighs more than its equivalent iPad.Â  I was looking forward then to trying a dinky 7 inch Playbook and when it arrived I opened the packaging with scant regard for reusing it sometime.

When I turned it on I found that it was still logged-in with the user account of my relative, complete with her settings and possibly even credit-card details for the marketplace.Â  I decided then to start from scratch and reset the device.Â  Now you might ordinarily expect a "factory reset" to restore a computer to the point it was at when it left the factory, yes?Â  On any other device, for example my TouchPad or an iPad, an iPhone, my Windows Phone or any Android tablet a reset would set the machine up for you as you would see it when it was first unboxed, complete with apps for the camera, mapping, photos, music, videos, possibly file management, a few games and of course a web browser. 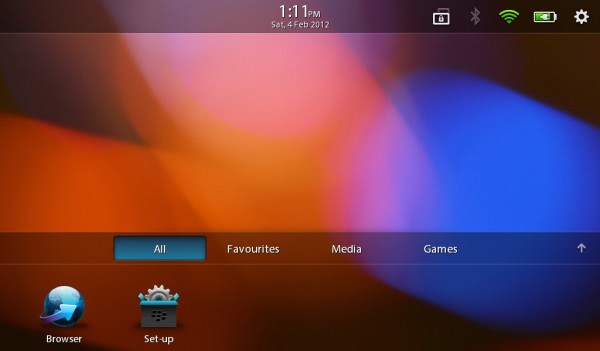 All I can say is that when I had finished the reset and had created a new Blackberry ID for myself the web browser was there.Â  I was very alarmed at this point to discover that everything else had been deleted, including all of the apps that you might consider "default" and a part of the operating system.Â  You can see this in the screenshot above (which I was fortunately able to take despite the camera app being absent).

After a mild panic I hit the Blackberry forums to search for an answer.Â  Here I discovered a great many people having problems at the same time with, usually new, Playbooks.Â  A phone call to the support department (at least Blackberry have actual Human beings answering a phone which is an absolute blessing) confirmed my fears, that the company was having yet another server outage, this time to the update servers, following a botched maintenance operation.

The support person informed me that the default apps weren't on the flash memory in the device, but were instead loaded upon a reset from the Blackberry OS and software update server, which was down, and that as a result I'd been given a corrupt version of the operating system and would have to wait until the servers were repaired and try the whole operation again.

Currently the Playbook is sitting on my desk, switched off as it's not quite heavy enough to be used as a doorstop.Â  These server outages at RIM are regularly reported and the achilles heel of the company's desire to direct all traffic through it's own closed and secure servers.Â  The last time there was a Blackberry outage it lasted for several days and affected every country worldwide.Â  On my very first day with any Blackberry device, here was the evil gremlin laughing back at me.

I'm not saying this isn't a reason to jump back to my TouchPad, I've not turned it on today.Â  This is a major problem affecting RIM however and its one that is causing them significant problems with lost market share as the 21st century progresses.Â  I can live without my Playbook for a few more days, frustrating as it might be, but for RIM to survive in the long-term, server outages such as this one simply must be the exception instead of the rule.

Previous Post: « Kinect For Windows Coming In February, Preorders Available
Next Post: « Which is the Best Tablet Form-Factor - Review