Real Temp is a lightweight computer software program for the Windows operating system that has been designed to provide the user with information about the temperature of Intel cpus. The software program supports Intel single Core, dual Core and quad Core processors and will display the processor temperature in real time in the application interface. It will also display the cpu temperatures in the Windows system tray after minimizing the program.

Real Temp displays various information about the cpu. The information are not limited to the cpu temperatures but also the model of the cpu, clock speeds and cpu load. 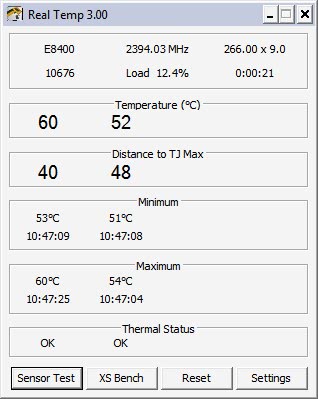 The main purpose of Real Temp is however cpu temperature monitoring. The temperatures of each cpu core are displayed in columns in the program's interface. They are divided into various sections that display the maximum and minimum temperatures as well as the current cpu temperature.

The time that the maximum and minimum temperature levels were reached are also displayed in the program which is great for troubleshooting purposes. Many advanced settings are available that can change the information that are displayed, integrate external applications such as RivaTuner or settings that define how and where the application is displayed.

The CPU temperature monitor Real Temp uses less than one Megabyte of computer memory when running minimized in the system tray. Computer users with Intel cpus might want to give the software program a try.

Martin Brinkmann is a journalist from Germany who founded Ghacks Technology News Back in 2005. He is passionate about all things tech and knows the Internet and computers like the back of his hand. You can follow Martin on Facebook or Twitter
View all posts by Martin Brinkmann →
Previous Post: « PC Power Management Software PowerSlave
Next Post: Notepad++ Autosave »