It has to be authorized to communicate with Flickr on first run (which is done on the Flickr homepage) but runs independently from the photo hosting site afterwards.

The interface comes with a basic folder browser which can be used to select folders that you want synchronized with your Flickr account. The selection of a folder opens a properties dialog that offers several configuration options for the synchronization. 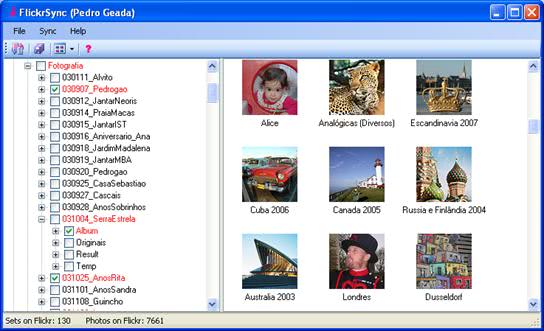 This includes a title and description for that folder on Flickr, permission settings (public, private, only friends, only family, friends and family), a matching method (what to do if images already exist on Flickr), order and filters.

It is also possible to right-click a folder and synchronize its contents (and the contents of its subfolder if selected) this way.

FlickrSync can be run automatically from the command line after the first configuration. This process requires no user interaction which makes it a great way to synchronize photos with Flickr on a regular basis, e.g. during system startup or after moving photos from a digital camera to the computer system.

Update: The developer seems to have abandoned the program judging from missing compatibility information for newer versions of Microsoft Windows. The last update dates back to 2014. While it may still work, it seems unlikely that it does.

Flickr has released its own tool, called Uploadr for Windows and Mac, but it is only available to Pro users of the photo hosting service. The company has released apps for iOS and Android with upload functionality, and they appear not to be restricted to Pro account owners only.