EEE Rotate is a free program for ASUS EEE PCs that provides you with options to rotate the screen of the device to use it in a rotated state.

Some laptop monitor screens are not suited for reading large texts on them due to the amount of scrolling involved as the screens may not have enough width or height.

While the width of the screen is usually appropriate to prevent horizontal scrolling, the height of the laptop screen results in lots of vertical scrolling.

This is particularly problematic when you are reading documents on the device, or browse text on websites. 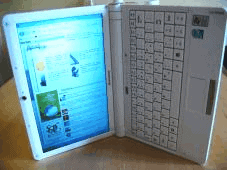 A small utility to rotate the laptop monitor screen so that width and height are swapped is EEE Rotate.

It has been designed for Asus EEE PCs but can actually be used with other laptops and even desktop computers as well. The program is portable and places an icon in the system tray when you launch it on the PC.

It will add four keyboard shortcuts to the computer system that can be used to rotate the monitor screen.

The shortcuts begin with [Ctrl ALT] and require one of the arrow keys to be pressed as well. [Ctrl Alt Up] returns the screen to the initial position while [Ctrl Alt Right-Arrow] rotates it by 270 degrees. [Ctrl Alt Down] rotates it 180 degrees and [Ctrl Alt Left] by 90 degrees.

One interesting additional feature is that the software will also rotate the input device to match the screen rotation. What this means is that you can use your mouse or the touchpad as usual and don't have to think around the corner to move the cursor in the right direction.

The portable software EEE Rotate worked fine on a Windows XP SP3 test system but the executable had to be extracted (can be done with 7-zip for example) as the setup would throw an error message when executed directly.

Update: The program is still available and should work fine under Windows XP. I have not tested the screen rotation program under newer versions of Windows though. Some document readers, like Adobe Reader, support the rotation of documents as well which you can utilize on systems where the program is not working on anymore.

Update 2: I have tested the application on a 64-bit Windows 7 Professional system and it worked as advertised. I was able to install it directly on the system and experienced no issues whatsoever using it.

Note that it will add itself to the startup folder of the system. To remove the entry again, do the following:

Martin Brinkmann is a journalist from Germany who founded Ghacks Technology News Back in 2005. He is passionate about all things tech and knows the Internet and computers like the back of his hand. You can follow Martin on Facebook or Twitter
View all posts by Martin Brinkmann →
Previous Post: « Microsoft Office Add-ins Manager
Next Post: Flickr File Synchronization Software »