YouTube is a platform home to thousands of content creators and streamers producing videos for entertainment and education. As one of the companies owned by Google, there’s many tips, news, scandals, features, and tools we’ll share for you to read.

I sometimes wish that I would be there when my friend, a family member or colleague watches a YouTube video that I have discovered. It sometimes happens if the url of the […]

YouTube users experience a wide variety of problems and issues on the popular video hosting portal. Probably the most common issues for most users are playback problems while playing YouTube videos. This […]

YouTube and other video portals on the Internet have come a long way since the beginning of the online video boom. What started with low resolutions of 320x240 or even more low […]

Note: The first method outlined below is not working anymore. Both the autoplay and loop parameters stopped working some time ago and cannot be used anymore. The scripts listed below are also […]

If you have to explain a concept to someone you better make sure to match their proficiency level so that they actually understand what you are talking about. If you work in […]

Comments can be very useful wherever they are allowed. To many comments on the other hand make it complicated to get a good overview of the opinions in the comments especially if […]

The various video qualities on the YouTube video portal are confusing part of the site's userbase. YouTube videos can be viewed in the original quality, in a screen resolution of 320 x […]

Visual Wikipedia is a visual mashup of Wikipedia information and Youtube videos. The service works much like the regular Wikipedia website with the difference that it adds additional data sources and visual […]

We have already covered the Windows Live Facebook plugin today which made it possible to upload photos from the Windows Live Photo Gallery application directly to Facebook. The Live Upload To Youtube […]

If you visit Youtube you might have noticed the "watch in high quality" link beneath some videos on the video portal. The high quality link leads to a video with a better […]

Till now, YouTube was a place only for watching videos. Still, with other sites getting their act together, it was only a matter of time before these guys pulled up their socks […]

Have you been watching videos lately on Youtube ? A judge ordered Google to hand over all video history data of the website to Viacom which is suing Google since 2007 for […]

Developers of the video streaming site YouTube have finally added a new feature to the website: it's called YouTube Annotations and you can see it here in action. It is subtext for […]

Youtomb is a MIT Free Culture research project that monitors the most popular Youtube videos for copyright related takedowns. The project is currently monitoring more than 220000 videos on Youtube and noticed […]

Timetube is a Youtube mashup that creates a timeline of Youtube videos related to a keyword that the user is searching for. The time period can be altered from 1 day to […]

YouTube is one of the most popular video sharing sites on the internet today. Although videos posted on the site may not have the best quality thereâ€™s no doubt in my mind […]

When we read the announcement that higher quality videos would come to Youtube we were delighted that the video quality would finally see an upgrade. Apparently the conversion has started and some videos are already available in different quality versions. It still looks like Youtube is testing settings and stuff and that not everyone can access those higher quality videos yet.

Once again the leaders of a country decided to ban a website because of (pick one: religious beliefs, political beliefs, constitution, local laws, medieval mindsets) which reminds me a lot of the kid that goes crying to their mama if another kid is mean to them. The other kid being Youtube in this case and the crying baby Pakistan, or more precisely the leaders of Pakistan.

Almost everyone has used PowerPoint for presentations at some time or the other. Even if youâ€™ve moved on to apps at GoogleDocs or the Zoho suite, PowerPoint is still a handy tool […]

Considering how many people post videos on Youtube, Iâ€™m surprised I never thought of posting about this before. While Myspace has been customized to such an extent so as to make the […]

It is possible to create ringtones from any song you like with free tools. Yes, that's right, you don't have to pay a dime for software, the music or the ringtone. All you need is some time and patience. You do need several utilities to create the ringtones: Audacity, the Lame Encoder if you do not have it installed already, FLV Extract, a browser and a video downloader. I suggest using Firefox and the excellent Download Helper extension. Install everything, look at the Download Helper article that I wrote a few weeks ago if you have troubles installing the Firefox add-on.

Turkey has once again banned access to the video portal Youtube. Access to the website Youtube was blocked in Turkey after a court oder on Thursday. Turkish users seem to receive a message explaining the ban of Youtube. The reason for the third ban are once again videos that make fun of Mustafa Kemal AtatÃ¼rk, the founder and first President of the Republic of Turkey.

Youtube is a well established video portal with the huge advantage that content is added every second by its visitors. Most Internet users probably do not know that Microsoft has its own video portal called MSN Video. That is probably the greatest weakness of MSN Video that hardly anyone knows about it and that this has direct impact on the amount of available videos.

Microsoft competes with Google in many areas but has still chosen to create a video channel on Youtube to promote Microsoft products. While this seems odd it could be an effort to reach potential customers in enemy territory. What most websites reporting about the ads are reporting is that the PR guys decided to leave the comment function activated which invites many comments that are criticizing Microsoft.

I have been praising emTube just a day ago which was an application for Symbian S60 mobile phones such as the Nokia N73 and Nokia N95 that made it possible to browse Youtube with your mobile phone and download + view movies as well. No conversion was needed and the quality of the service was astonishingly good.

Graham send me an email just a few minutes ago informing me that Youtube users could finally upload high definition videos to Youtube which have the benefit of a much sharper, clearer image and the negative side effect (for some users) of a size increase of the videos.

If you ever wondered how so many users are able to watch hundreds of videos that are published on Youtube on a daily basis you might want to consider using a service like SlapVid which offers previews of the daily top 25 videos at Youtube.

Youtube Sunday it seems. We all know that Youtube likes to cooperate with everyone who looks a bit like authority and takes down videos pretty fast. It does not always have to be copyright infringement, it can also be original works of art that some authorities like the Turkish or Thai government want removed from Youtube pressuring the site with a countrywide ban. (man I love the Turkish interpretation of Democracy and free speech)

You might know that Youtube held a video awards voting on their site for the last five days were everyone was able to vote for their favorite videos that Youtube preselected. Ten entries were shown and you could assign spots from 1 to 10 to them. Now, after all votes have been cast Youtube presents the Winners of the 2006 Video Awards in the categories Most Creative, Best Comedy, Best Commentary, Best Series, Best Music Video, Most Inspirational and Most Adorable. The videos below are in the same order in case you are wondering. 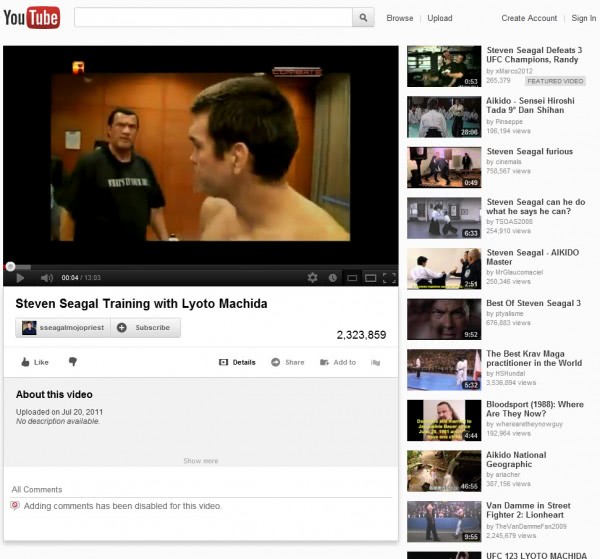 With all the rumors about an acquisition of youtube by Google circulation on many websites it was only a matter of time when the real deal was announced. This happened some minutes ago. Google officially announced the deal in a press conference that took place today. Youtube was acquired for 1.65 billion dollars in a stock-for-stock transaction.