If you have ever tried to use Youtube on a big television screen you may have noticed that the controls of the standard page are not that easy to use as on a PC. Instead of fiddling around with the standard controls, Youtube users have the option to access the XL version of the popular video portal.

XL version, what's that again? If you point your web browser to youtube.com/xl you will see a different layout, optimized for large screens. The differences? Night and day.

Youtube XL displays very large buttons in a sidebar, larger video thumbnails, titles and information in the main area and a big search form on top. 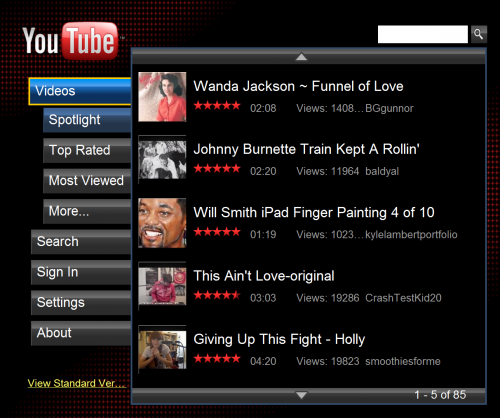 Youtube XL lists spotlight videos by default. Each video box is completely clickable making it easier to load a video. Videos that are loaded make use of a similar optimized interface.

Next to the video that starts playing automatically are several related video entries and five buttons at the bottom to favorite, flag or share the video, display video information and see related videos which is also the default page. 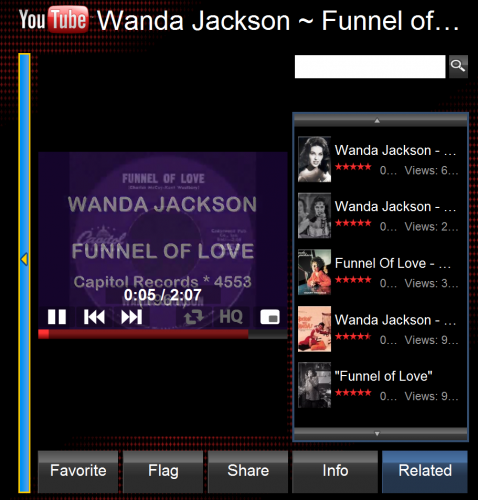 Most controls on Youtube XL change elements on the page without reloading the whole page. This speeds up surfing noticeably. The sidebar on the homepage offers access to several video filters. It is for instance possible to switch from spotlight to top rated or most viewed, and change the time based filter from today to all time or this week.

The more link offers groups of additional buttons that were not included in the main layout. Here it is possible to access several music categories for instance.

Youtube XL supports accounts, and users can login normally. This is a requirement for some features like favoring a video. The settings can be used to change the display language and geography. Another useful option here is the setting to play the next video automatically when the current video ends, which reduces the user interaction further. Oh, and before you ask: Yes, there is a fullscreen option.

Youtube XL can be an interesting option for users who access the video hosting site on large screens.