Youtube Homepage As It Was Meant To Be Userscript

YouTube recently changed the homepage after an initial tryout phase. The developers "removed some of the less-used modules such as "Videos Being Watched Now", moved modules like featured videos to the right side to make "room for a combined list of personally relevant videos made up of recommendations for you, your subscriptions activity, and videos being shared by your friends".

With change comes criticism, especially on sites with millions of users. The official announcement post has about 400 user comments right now of which the majority are negative.

What is being criticized? The two main points are linked to subscriptions and the user inbox, for instance that the homepage is now showing videos liked or favorites one is subscribed to, or that users with lots of subscriptions need to scroll a lot more vertically.

Update: Please note that the userscript is not working anymore on the most recent version of YouTube. It has not been updated for several years now and appears to be abandoned by its author. You can read about the most recent changes on YouTube here.

I suggest you check out the recommendations posted in that article to access specific pages on YouTube directly. There does not seem to be an option right now to modify the YouTube homepage the way the reviewed script did in the past. We have removed the link to the script as a consequence. 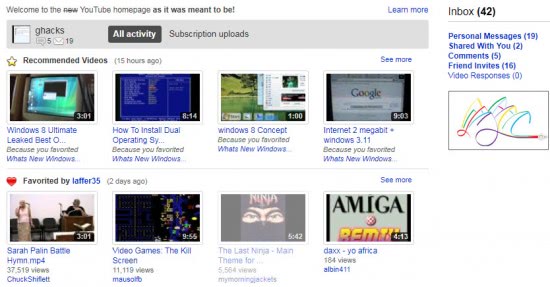 The script is not taking care of all the layout changes though. YouTube homepage as it was meant to be is available for direct installation at the Userscript.org website.