Google Video Closing Down, What You Need To Know

Before Youtube, Google tried to conquer the video hosting niche with a service that they called Google Video. When they discovered that they could not compete with Youtube, they bought that service and made people forget all about Google Video. There are actually many similarities to Google's attempt in past years to get a foothold in the lucrative social networking niche which they have not succeeded in yet.

Back to Google Video. The service was not closed down immediately after the Youtube purchase, but it was clearly put on the backseat both in advertising and development efforts. Uploads were disabled in 2009 but hosted videos continued to be served.

This is going to change in the near future. Users of Google Video, that is users who have uploaded videos to the service, have received emails in the past week that informed them about the shutdown of the service on May 13. The first part of it is pasted below.

Later this month, hosted video content on Google Video will no longer be available for playback. Google Video stopped taking uploads in May 2009 and now weâ€™re removing the remaining hosted content. Weâ€™ve always maintained that the strength of Google Video is its ability to let people search videos from across the web, regardless of where those videos are hosted. And this move will enable us to focus on developing these technologies further to the benefit of searchers worldwide.

On April 29, 2011, videos that have been uploaded to Google Video will no longer be available for playback. Weâ€™ve added a Download button to the video status page, so you can download any video content you want to save. If you donâ€™t want to download your content, you donâ€™t need to do anything. (The Download feature will be disabled after May 13, 2011.)

For the next two weeks or so, you are able to play videos on Google Video just as usual. This data is for instance important to webmasters who have embedded Google Video contents on their sites. After April 29, those videos won't play anymore. Then, two weeks later, the whole service will shut down. 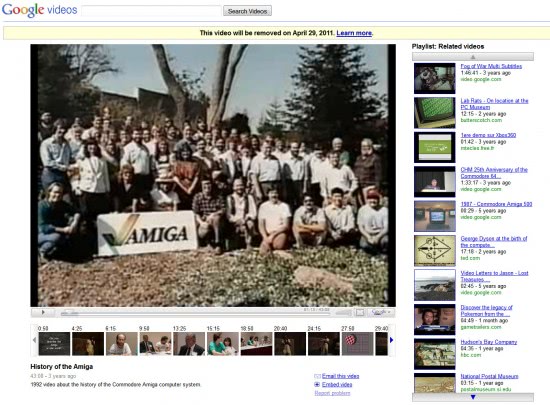 Google Video users who have uploaded videos to the video hosting service can download those videos from their Video Status page.

We encourage you to move to your content to YouTube if you havenâ€™t done so already. YouTube offers many video hosting options including the ability to share your videos privately or in an unlisted manner. To learn more go here.

Go to the Video Status page.
To download a video to your computer, click the Download Video link located on the right side of each of your videos in the Actions column.

Once a video has been downloaded, â€œAlready Downloadedâ€ will appear next to the Download Video link.

If you have many videos on Google Video, you may need to use the paging controls located on the bottom right of the page to access them all.

Please note: This download option will be available through May 13, 2011.

Thank you for being a Google Video user.

Google obviously recommends Youtube, as it is their second video hosting service, the one they bought after finding out that Google Video was not the Internet user's favorite service. You could naturally upload the videos to Youtube, which on the other hand raises the question if you should do that, or look for a more reliable hosting solution. While it is unlikely that Youtube will be closed down in the near future, users would probably have said the very same thing about Google Video.

Video uploaders can download their videos via the Video Status page. But what about webmasters who have embedded those videos on their websites and blogs? They need a third party solution to download this videos, or they could try and find the same or a similar video on other video hosting sites.

One of the easiest options to download those videos is to use the Firefox extension Download Helper.