Thunderbird 45.0 has been released

Mozilla has released an update to the desktop email client Thunderbird that brings the version of the program to Thunderbird 45.0.

It is a major update of the application which has been on life support ever since Mozilla decided to hand over development to the community in 2012 and use freed up resources for other projects.

Then in 2015 Mozilla announced that it would drop the email client altogether even though usage was still on the rise.

The update is already available on the official download site but the client itself has yet to pick it up. This will happen soon however, and you can run checks for updates with a click on Help > About Thunderbird from within the application.

The short answer: a lot. If you check out the release notes, you find more items listed there as new as in the past two years combined.

The new feature is available when you click on the from field when composing email addresses. It enables you to make changes to the from address that are valid only for the current email.

One example where this may be useful is if an email service supports aliases. If you use Gmail for instance, you can add +text after the username of the email address to create an alias. 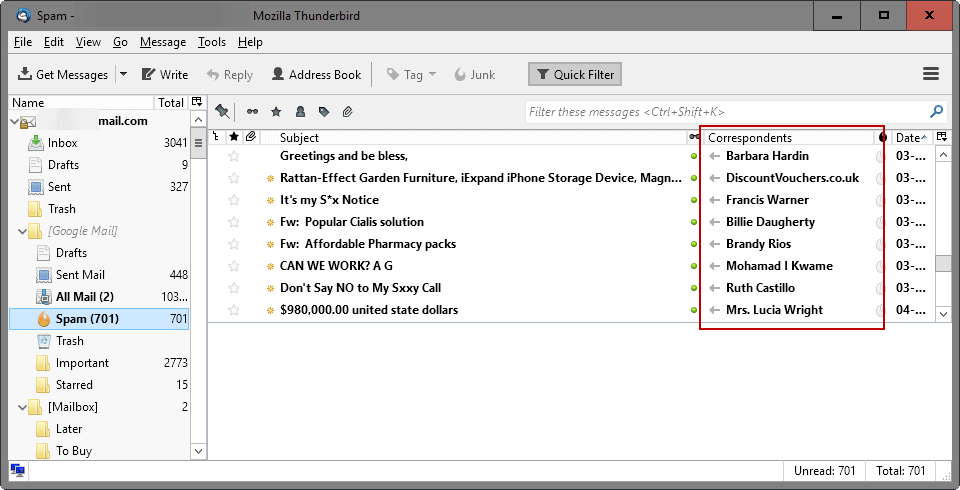 Correspondents is a new column that is displayed by default that combines sender and recipients. You can still add the from column back by right-clicking on the header and selecting the option from the menu that opens up.

The main difference between the two is the arrow that you see on the right of the sender or recipient. A left arrow indicates that your selected email account received the message, a right arrow that it was sent from it.

The new control options provide you with granular options to allow remote content.

Besides new features and improvements to existing features, the team has fixed the following issues in Thunderbird 45.0.

As you can see, lots of changes and fixes in the new version of Thunderbird.

The email client Thunderbird 45.1.0 was released on May 10, 2016. It is a bug fix release that takes care of the following issues:

Thunderbird 45.2.0 was released on June 30, 2016. The update patches several security issues and the following issues:

Thunderbird45.4.0 was released on October 3, 2016. It is a bug fix release that makes the following changes to the email client:

Thunderbird 45.6.0 was released on December 28, 2016. It fixes several security issues and an issue that caused the system integration dialog to show up on every start of Thunderbird.

Thunderbird 45.7.0 was released on January 26, 2017. It is a release that fixes several issues in the email client including security issues.

Thunderbird 45.7.1 was released on February 7, 2017. It is a bug fix release that fixes a crash issue when viewing certain IMAP messages.

One issue, that the message preview pane is not functional after moving or renaming IMAP folders does still exist.

Article Name
Thunderbird 45.0 has been released
Description
Mozilla has released an update to the desktop email client Thunderbird that brings the version of the program to Thunderbird 45.0.
Author
Martin Brinkmann
Publisher
Ghacks Technology News
Logo