For years, Mozilla developed and maintained not only the Firefox web browser but also the Thunderbird email client.

Both products were received well when they were first released and both managed to attract millions of users who use the products on a daily basis.

Mozilla some time ago announced that it would remove staff from the Thunderbird project and hand over core development tasks to the community instead.

That was back in 2012, and for the most part since then, Thunderbird releases were nothing more than an assortment of bug and security fixes.

Today it appears as if Mozilla wants to cut the tie completely. Mozilla chairwoman Mitchell Baker revealed recently that Mozilla would like to drop Thunderbird completely.

Mozilla engineers pay a tax to support Thunderbird according to Baker while Thunderbird developers spend time making sure changes in the underlying architecture that both programs use work fine in Thunderbird. 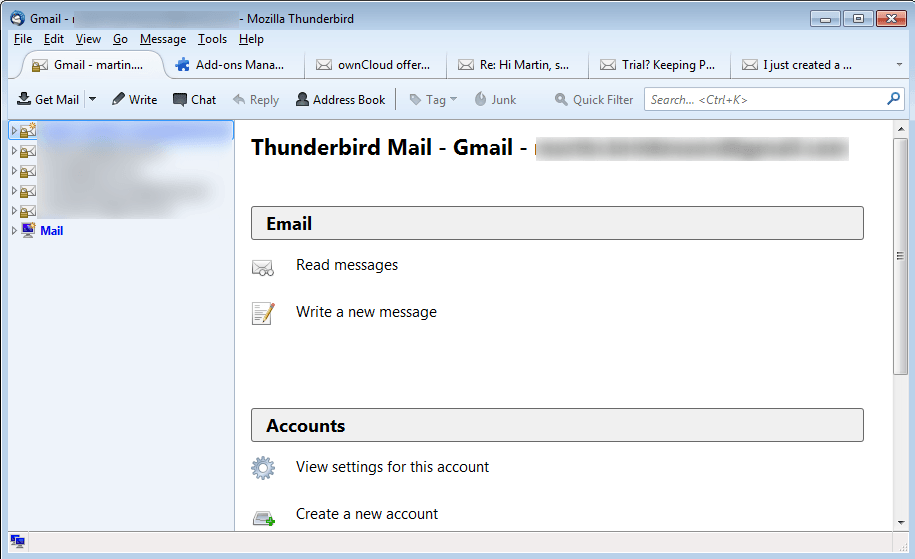 Baker mentioned that the "overwhelming majority" of Mozilla's leadership believes that Mozilla should focus only on activities that "can have an industry-wide impact", and that she thinks that Thunderbird does not fall into that category.

That does not mean that Thunderbird as a product will cease to exist. While Baker has no answer yet on how a transition would look like, and when it will happen, she seems certain that it will happen.

Mozilla plans to provide the Thunderbird team with financial and legal help, as well as other resources required to separate the project from Mozilla.

Mark Surman of the Mozilla Foundation and I are both interested in
helping find a way for Thunderbird to separate from Mozilla
infrastructure. We also want to make sure that Thunderbird has the right
kind of legal and financial home, one that will help the community
thrive.

Basically, what Mozilla wants is to hand over Thunderbird to free up resources, and to use those resources for Firefox and other projects that it believes have a wider impact on the Internet and technology.

Thunderbird is not mentioned in Mozilla's 2014 audited financials report. It is unclear how much Mozilla spends on Thunderbird because of it.

It is unclear if the Thunderbird project can generate enough money to keep the project going. According to Mark Surman, Mozilla seems to be in talks with organizations who may be interested in supporting development and infrastructure, and is considering adding user donation options on top of that.

Now You: Good move or bad, what is your take on this?

Vivaldi Mail, Feed Reader and Calendar can now be tested

Thunderbird 78.4.3 is out with a handful of fixes

Previous Post: « Gmail Search to inform you about matches in spam
Next Post: Thunderbird usage is on the rise »