The third upgrade of Stardock's Windows 8 start menu application Start8 has just been released, only weeks after we have taken a look at Start8 1.01 released in early November. The new version of the program introduces several new features that users of the Windows 8 operating system may be interested in.

The main feature of Start8 is to add a start menu back to the desktop of Windows 8, so that users who have been working with previous versions of Windows before can use it again after buying a PC with Windows 8 or upgrading an older version of Windows to it. 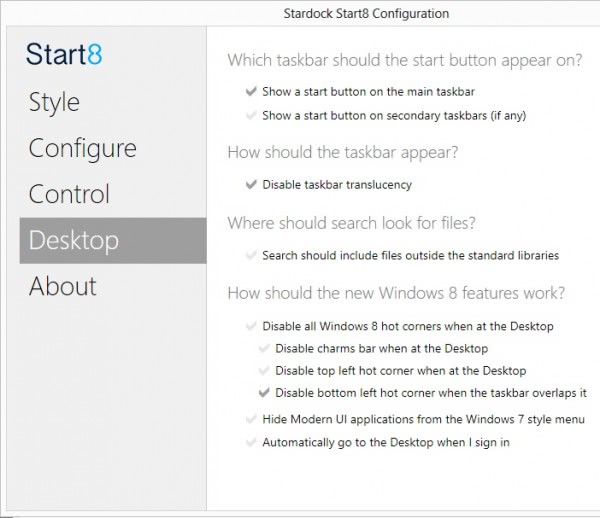 Some features, like the ability to enter a drive letter or path to open Windows Explorer from the start menu displaying that location, add functionality that the start menu of previous versions of Windows offered. Others improve the usability of the program or make it more versatile.

In the end though it is a personal decision whether you want to pay $5 for the program or instead use a free alternative such as Classic Shell which is really on-pair with it on many levels.

You can download the upgrade to Start8 1.03 from the official website after logging in there, or from third party websites like Softpedia without logging in. Just run the installer after you have downloaded it to update to the latest version.