How To Shut Down Windows 8

With the start menu gone for good in Microsoft's upcoming operating system Windows 8, some users have run into problems shutting down the PC properly. The shutdown button, originally attached to the start menu, has been moved by Microsoft to the new start screen. It is not directly visible on the screen though, and it might take users some time to find its new location.

Move the mouse cursor over the charms button in the lower right corner of the Metro UI start screen. Click the settings button there on the Charms menu, and there the Power button. This displays a context menu with the three options Sleep, Shut Down and Restart. 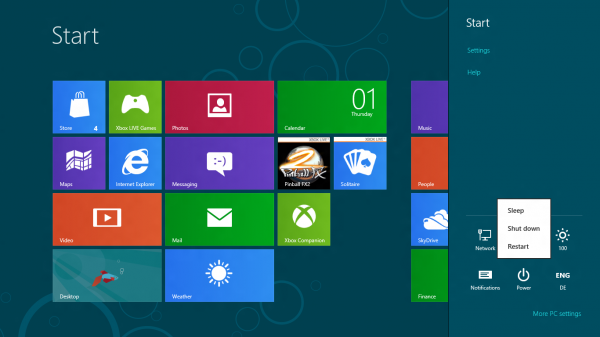 Quite a few alternatives are available. You can for instance use Ctrl-Alt-Del to bring up an administrative screen that lets you lock the computer, switch a user, sign out or open the task manager. The lower right corner of the screen displays the same power button that you see on the Start screen. A click opens the same menu with the shut down option included.

The Windows-i shortcut displays the Settings menu with a power button on both the desktop and the Start screen of the operating system. 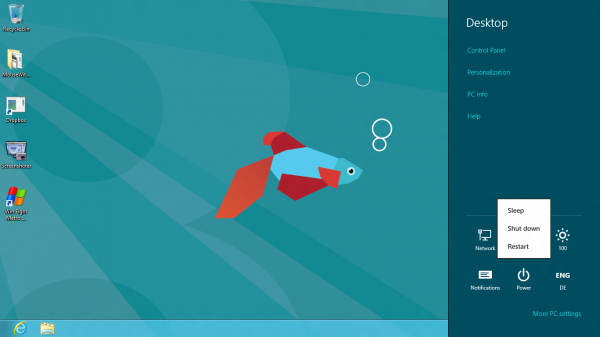 A fourth option lets you define what happens when you press the power and sleep button, and when you close the lid if you are using a mobile computer. The system is configured by default to put the computer in sleep mode on all actions. This can be changed individually to shut down the PC instead. You can configure the PC to shut down when you close the lid or press the power button.

The fifth option is a command that you can run in the following way. Press Windows-r to open the run box, and run the command shutdown -s -t 0. It may be impractical for you to run the command every time you want to shut down your computer. You can create a shortcut for the command to shut down whenever you double-click the shortcut.

Right-click your desktop and select New > Shortcut from the options. Enter shutdown -s -t 0 as the command and follow the wizard. The shortcut should now be ready for use on the desktop. (Thanks Caschy for the inspiration)