Start8 is one of my favorite solutions when it comes to adding a start menu back to the Windows 8 operating system.Â  While not free, it is reasonably priced at less than $5 considering that it is one of the best start menu programs for the system. Stardock has released a new version of Start8 today which brings the version of the application to 1.01. The version makes it look like a minor upgrade but it is anything but that.

The list of improvements and additions is long, and even longer if you have only worked with a beta version of the product but not a final version. The first thing that I noticed was the extensive configuration tool that is displayed after installation. Here you can change the appearance and functionality of the operating system so that it suits your needs.

This includes selecting the Windows 7 or Windows 8 style for the menu, how the button should look like, which shortcuts you want listed on the start menu (e.g. Documents, Control Panel, Printers, Administrative Tools), and how you access the start menu and Windows 8's start screen. 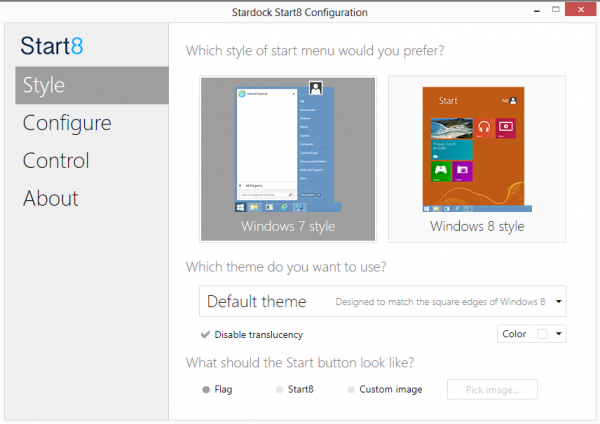 As far as improvements and feature additions goes, here are some of the more important changes in Start8 1.01.

Start8 offers several smaller features that I really like. It lets you for instance configure the left Windows-key to open the start menu on the desktop, and the right Windows-key to open the Windows 8 start screen. It is also one of the few applications that displays both Windows store apps and desktop programs in the start menu, and lets you disable hot corners when you are on the desktop (great when you work with fullscreen apps and the close button).