It is likely that the bulk of Windows users make use of the user folder and its directory structure to save files, documents, and downloads to.

The My Document, Music, Pictures and Downloads folders are often used to save files of the type, and it is only natural to take those files with you when you move to another system or install Windows anew.

While you could go ahead and backup those files manually, for instance by burning them to DVD, copying them to a USB Flash Drive, or moving them all into a folder that is synchronized with the cloud, you could also try Gotcha Backup Utility for that task.

The program has only one purpose: to back up user data folders so that you can restore the backed up data to the same or another computer system at a later point in time.

Unlike other programs of its kind it not only detects the user folders of the system you are currently logged in, but also those of other Windows installations that may reside on the computer.

That's helpful if you have installed Windows on a new hard drive (or even the same) on the same computer with the old drive still connected to it as well, as you can use the backup tool to copy files from the old operating system to the new. 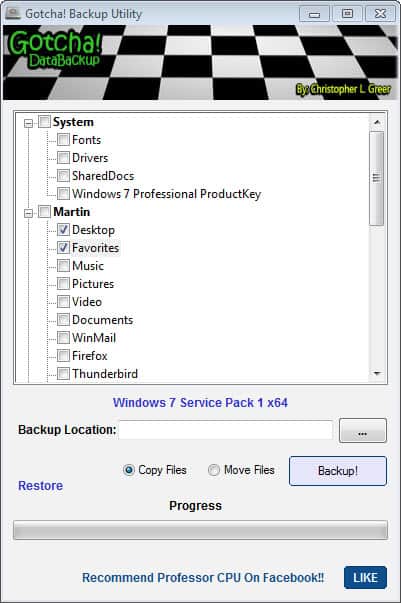 You are asked to pick the Windows installation that you want to work with when you start the portable program on your system. All user folders are then displayed in the interface with backup options, and it is up to you to select individual folders for backup or all personal folders of a user profile.

The system folder is listed here as well allowing you to backup fonts, drivers, shared documents and the Windows product key. Files are copied by the backup program by default but you can change the default operation to move instead. Moving may be appropriate if you want to remove the data from an old installation to avoid data redundancy.

Backed up files can be restored using the program, or, simply accessed in the backup folder where they are all readily available; this means, on the other hand, that data is not compressed to save space or encrypted to protect it against unauthorized access.

Gotcha Backup Utility is not a full backup software for Windows and should not be seen as such. It serves a specific purpose which experienced users may prefer to handle manually. Inexperienced users on the other hand or those in a hurry may find the program useful after all.

Most backup programs can be used for the same purpose. While most don't make it as easy as Gotcha Backup, most support folder backups and support extra features such as compression or encryption.

The program is compatible with all recent versions of the Microsoft Windows operating system.