A few weeks ago we Â showed you how to access the new YouTube interface that they were testing out. Â If you followed the steps and began using it, then you may have realized that last week it ceased working and reverted users back to the traditional UI. Â Well, now Google is at it again with yet another user interface test and there is, once again, a way for everyone to access it.

Hint: instead of following the path below to manually switch to YouTube's new experimental design, you can alternatively use the excellent YouTube Homepage Swap userscript which enables you to quickly switch between the actual design and the latest experimental design.

The steps are similar to the last time around.

4. press Enter and close the console.

The new UI is similar to that of the last test. Â You will find a new color scheme in the sidebar, more subscriptions viewable at one time, and a new default section heading Â called "Now Playing". Â In addition, some of the icons have been removed. Â There are also new icons for the "like" and "dislike" buttons, there's a new way to show the navigation sidebar and the "more from" section was removed. Â If you aren't signed into YouTube then the default home page will display popular videos from various genres like sports, entertainment and more. 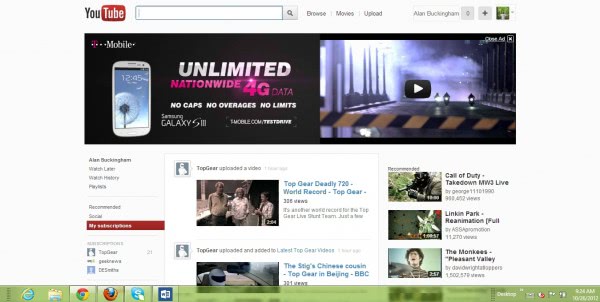 If this goes similarly to the last user interface test then it will likely work for about two weeks before disappearing suddenly. Â If you want to test it then you may want to do so now before Google kills it and moves on. Â Head over to YouTube and follow the steps outlined above.