Programs like Classic Shell will likely become more popular when Microsoft's upcoming operating system Windows 8 gets released later this year. We have already mentioned that it adds a start menu back to Windows 8 which users who work with the start menu all the time on previous versions of Windows may prefer over Microsoft's "switching to Metro's startpage solution".

Restoring the start menu removes one of the annoyances that some users experience when they are working with Windows 8. While it is certainly possible to get accustomed to the new way of starting applications and searching, some may prefer the old ways and Classic Shell is the program that allows them to do just that.

The developer of Classic Shell has just released an update for the program that takes care of another annoyance that some Windows 8 users may experience. Windows 8 by default boots into the Metro startpage which may not be a issue for some, but for users who only work on the desktop, it may be just an added step before they can start to work. When Windows 8 users update to or install the new version of Classic Shell, they may notice that Metro is skipped automatically on startup.

This works very similar to the manual workaround that we have posted at the beginning of the month. You do see the Metro screen for a second or two before the switch is automatically made to the desktop. 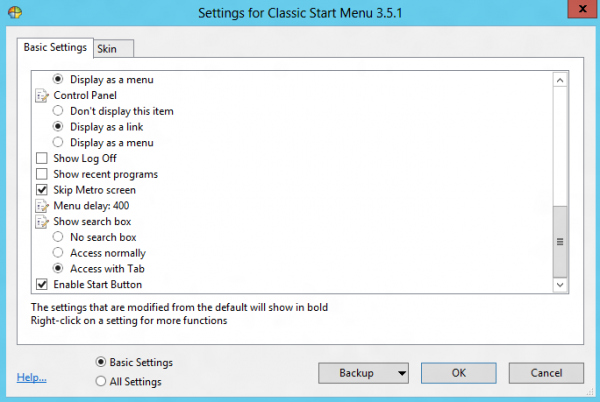 You can disable the option in the Classic Shell preferences if you do not want to skip Metro on start of Windows 8. Please note that Metro is still fully enabled, which means that you can still open the startpage from the Charms menu. The Windows-key on the other hand opens the start menu and does not switch to the Metro interface anymore.

Depending on how Classic Shell is configured on the system, the program may be updated automatically on next start up, or may require you to download the new version to install it manually on the system. (via Techdows)