When it comes to clearing your browser's history, you are likely using the built-in option of the web browser to do that, or a program like CCleaner if you are working with multiple browsers.

Both methods work really well and there is not really a reason to switch to another program to do that job. But what if you want to remove traces from multiple browsers, Windows itself, or other programs?

Update: Privacy Agent is no longer available. You can download the latest release version, released in 2012, from software download portals such as Softpedia (link in the summary box after the article). You may want to check out an alternative such as the free BleachBit instead which is updated regularly and does a great job at cleaning temporary files and traces from Windows PCs. 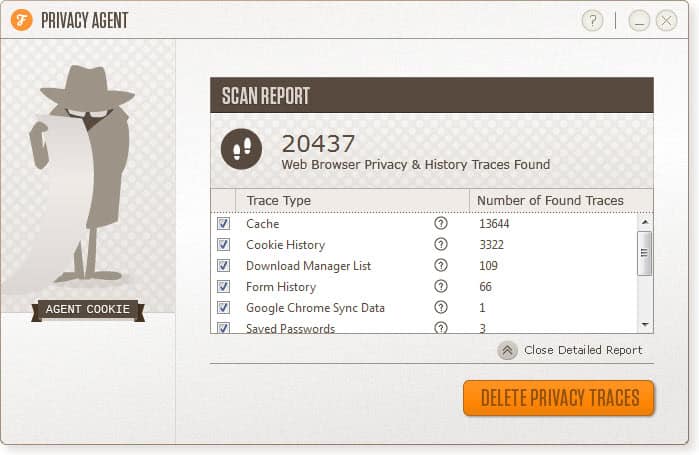 You could automate the task somewhat by using cleaning tools instead which support hundreds of locations and applications. CCleaner is probably the most popular one.

The program concentrates on options to clean history traces from web browsers, with history being all the things that get saved or recorded by the browser during use.

This includes the cache and cookies, the downloads and form history, as well as saved passwords and synchronization data.

The thing that I like most about Privacy Agent is that it is really easy to use. You install it, start it up, click the scan button, and then either directly on the delete privacy traces button, or after you have looked at the program's findings in the scan report.

And that's it. The program supports Google Chrome, Firefox, Safari and Internet Explorer. It feels strange that the developer is not supporting the Opera browser as well.

This is actually one of the things to criticize, the other the lack of information that you get when you open the scan report. While you see the number of traces found for each trace type, you can't delve deeper into the matter. While you may not want to do just that, some users might prefer an option to uncheck some of the traces from being deleted, while keeping others checked for removal. With Privacy Agent, this is unfortunately not possible.

Privacy Agent is fully compatible with recent 32-bit and 64-bit editions of the Microsoft Windows operating system, starting with Windows XP all the way up to the latest versions. According to the homepage, a Mac version is in the making.

Privacy Agent was a handy program for Windows that looked great but lacked information and some features that other cleaners offered. The developers of the program never got around to improving the application in this regards, unfortunately.

Martin Brinkmann is a journalist from Germany who founded Ghacks Technology News Back in 2005. He is passionate about all things tech and knows the Internet and computers like the back of his hand. You can follow Martin on Facebook or Twitter
View all posts by Martin Brinkmann →
Previous Post: « Remove Old Device Information To Speed Up Windows
Next Post: Join, Edit and Convert Media With FreeMediaConverter »