Before Ghacks I was working in the support department of one of Germany's largest financial companies. I regularly received support requests from customers and employees, and many of the most common requests were login related. Users and employees trying to access a service could not do so because their login credentials were not accepted. Two of the core reasons for those login related issues where key state changes on the system that the users did not notice. The first was the numlock key state, which turns on or off the numpad on the system.

Users trying to enter digits via the numpad could not do so if it had been deactivated before. The second was the caps lock key which turned lower case letters into upper case, and numbers on the keyboard to special characters.

Experienced users often do not have problems spotting those key state changes right away, for instance by looking at the leds of the keyboard, or by typing the login name or password into a text document or the browser's web address form.

Keyndicate introduces an automated solution. It basically acts as a notifier whenever one of the following key states change on the PC system: CapsLock, NumLock, ScrollLock. Notifications need to be enabled in the settings of the program before they are displayed whenever they change on the system. 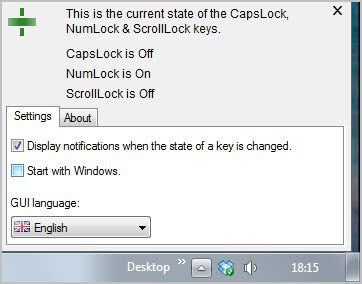 The program displays the key states in the system tray icon as well. A horizontal bar means that the state is set to on, and a smaller bar that it is off. The only other option available is to configure the program to start with the operating system.

Users who are interested in the program may also be interested in alternatives that we have reviewed in the past. This includes Keyboard Indicator which displays each state in its own icon in the system tray and Keyboard Leds.

Keyndicate can be downloaded from the developer website. The program is fully portable and compatible with all Windows operating systems from Windows XP on.