I'm not a huge fan of the rapid release process of the Firefox web browser or Google Chrome. Not so much as a user but as someone who is interested in following the development of a web browser, and a webmaster who likes to write about it.

A new version every three months or so, and a confusing assortment of release channels makes it less interesting to keep an overview over each channel. With four channels for Firefox and Google Chrome alone each, I already have to spend a considerable amount of time to keep an eye on all developments.

Thunderbird recently joined the rapid release process as well, with the beta versions recently jumping a version to version 5.

Instead of using Firefox's naming convention, which is stable, beta, aurora and nightly, the developers have decided to introduce a new set of channel names. The nightly versions of Thunderbird are called Shredder, the Aurora versions Earlybird and the beta versions Miramar. The latest nightly versions are already at version 7, while the latest stable releases are at version 3.

Update: Names have changed. While Earlybird is still a thing, Shreed and Miramar are not anymore. Shredder is called Nightly now and Miramar Beta.

We have already looked at the features that Mozilla Messaging plans to introduce in Thunderbird 5 and you can get the full overview of things to come here.

Among the changes are a new add-on manager that looks identical to the extensions manager of the Firefox web browser.

Other new features include a revised account setup wizard that has been optimized once again, an optimized display of email attachments including attachment sizes, tab reordering and a new troubleshooting information page. 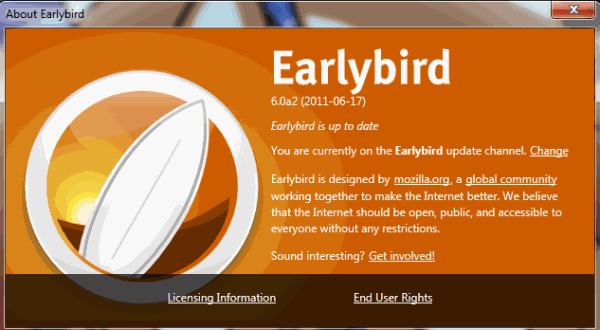 Interested users can download Thunderbird 5 Beta from the early releases page over at Mozilla Messaging. The beta version is available for all supported operating systems and languages. Nightly releases are currently only available on the official ftp server.

What's your take on the rapid release process and the new names for the different Thunderbird channels? Let me know in the comments. (via)

Martin Brinkmann is a journalist from Germany who founded Ghacks Technology News Back in 2005. He is passionate about all things tech and knows the Internet and computers like the back of his hand. You can follow Martin on Facebook or Twitter
View all posts by Martin Brinkmann →
Previous Post: « Cryoserver’s Email Archiving Offered as an Application or Hosted on The Cloud
Next Post: Microsoft Hotmail Improved, Keyboard Shortcuts, Personalization »