When you look at the top five web browsers on today's Internet, which are undoubtedly Firefox, Internet Explorer, Google Chrome, Opera and Safari you will notice that all but one reduce their functionality to Internet browsing. Opera is the only browser of the five that offers an integrated email client.

The idea behind SeaMonkey is to provide users with an all-in-one Internet application for their needs. SeaMonkey is based on the Mozilla platform which is also used by the Firefox web browser. Unlike Firefox it includes additional tools and Internet applications like an email client, IRC chat client or news feed client. It shares code with both Firefox and Mozilla Thunderbird.

Experienced Firefox users may weight in that they can install add-ons that add the functionality to the browser. While that's true for some features like the IRC chat, it is not true for others like the email client. When you look closer, you will notice that SeaMonkey has integrated some of those add-ons in the browser. 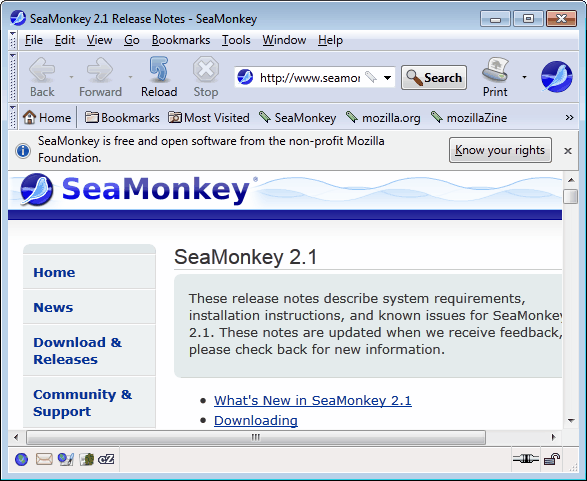 Users basically get Firefox plus already installed add-ons and additional integrated tools like the email client. That's handy for Internet users who are not tech savvy enough to install add-ons for instance, or users who want one software for all their Internet needs. SeaMonkey offers to import data from Thunderbird if the email client is discovered during installation which is handy for users who want to make the switch.

The release notes list the new features of SeaMonkey 2.1, among them integration of data synchronization, the Firefox add-on Personas which can be used to modify the browser's theme more easily, a new data manager for managing permissions, cookies, passwords and form data, and improved plugin handling.

Interested users can download SeaMonkey 2.1 from the official project website. The Internet software is available for Windows, Linux and Mac, and is offered as a localized version.

As a note on the side. SeaMonkey 2.1 is still using the old Firefox design, making it an excellent alternative for users who do not want to make the switch to Firefox 4 because of the design.

Martin Brinkmann is a journalist from Germany who founded Ghacks Technology News Back in 2005. He is passionate about all things tech and knows the Internet and computers like the back of his hand. You can follow Martin on Facebook or Twitter
View all posts by Martin Brinkmann →
Previous Post: « Today is IPv6 day!
Next Post: Springpad Provides Everyday Note-Taking Alternative to Evernote, OneNote »