How Long Do You Give Fetch.io? - gHacks Tech News
ghacks.net

How Long Do You Give Fetch.io?

The new Bittorrent related service Fetch.io has been in the news ever since it was mentioned over at Torrentfreak two days ago. Fetch.io acts as a middleman by downloading torrents to their servers. The files that are downloaded this way are automatically transcoded into mp4 and Flash video formats before they become available for streaming, downloading and sharing.

Torrents are seeded by the service until a ratio of 1:1,25 has been reached, which means that you share more than you download.

I do not want to rehash everything that has been said about Fetch.io, the Torrentfreak article and comment section covers this extensively already. 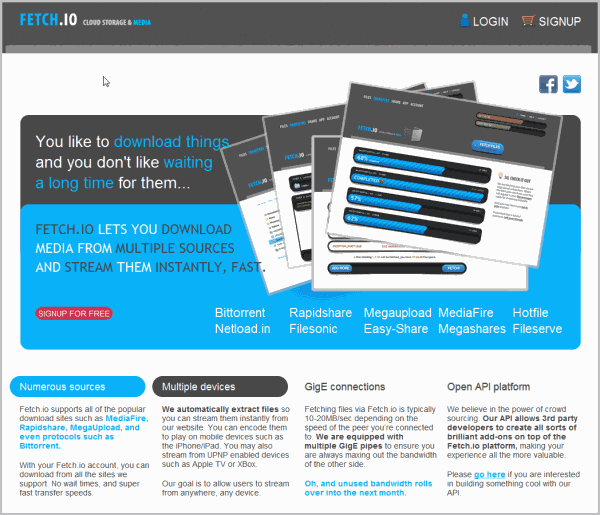 What I would like to do instead is to look at the service from a legal and business perspective.

The service is currently offering free beta accounts that give users 20 Gigabytes of storage and 40 Gigabytes of bandwidth. You can get your bandwidth reset by emailing the developers.

If you tried to use the service ever since it has been mentioned by Torrentfreak you may have noticed that it is not capable of handling the load currently. You may get error messages on various pages of the service. Some users have reported that they cannot add torrents at all at this point, others noted that while they were able to add torrents, they could not get Fetch.io to download them.

The developers mentioned that they are starting to add more server hardware to improve overall performance of the service for all beta users.

Plans are to launch a paid service after the beta phase. There will still be a free account available for users to test the service, but the storage and bandwidth will likely be reduced. The fact that both torrent and file hosting sites are supported makes the service attractive, the pricing and payment options will however determine if the service will become a success, or if it will disappear like many others before it.

While there is a market for services like this, it should be clear that only a minority of users are willing to pay for such a service. The main reason for that is that payments link their identity to the online account.

But what about legalities? I'm no lawyer, and I may be dead wrong here, but is not the service downloading and seeding those torrent files? What happens if the service seeds and downloads copyrighted media? Can the service be held accountable for that?

On the other hand, the torrents are selected by the user of the service. So who is infringing here? The user uploading the torrent, the service that is download and seeding the files, both, or none?

What's your take on Fetch.io? Do you think that they will be around in a year?

Update: The Fetch.io website is currently not accessible. It can be that the product has been discontinued, or that the service is currently experiencing technical difficulties.

Previous Post: « Netflix Accounts For More Web Traffic Than Torrenting
Next Post: 8 Social Likes That You May Not Want To See In The Search Results »