The remove programs module in the Windows Control Panel offers basic means to uninstall software in Windows. The tool is severely limited which becomes obvious when problems are encountered. Every Windows user will likely experience situations where software cannot be removed using the standard remove programs module. The uninstallation simply stops or does not start at all leaving the user puzzled and confused. Another problem with the remove programs control panel module is that it does not list all of the programs that have been installed in Windows. 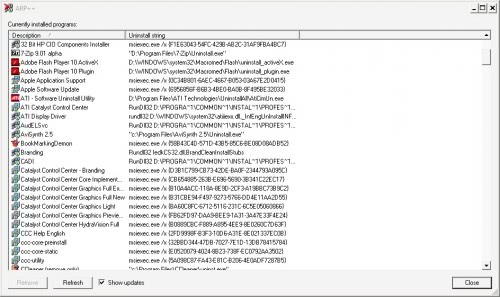 The program falls a bit short on options. It is possible to hide updates from the list of programs that can be uninstalled in Windows. That's usually a good start as it makes it easier to skim through the rest of applications listed. Programs can be removed by selecting them and clicking on the Remove button.

Arp++ does not offer advanced features (like scanning the computer system for leftovers after installation) that other uninstallers like Revo Uninstaller offer. It is on the other hand more responsive than the default Remove Programs module in Windows. The developer is offering a 32-bit and 64-bit edition of Arp++ on the homepage.

Update: Arp++ has been last updated in 2010, which may indicate that the developer has put further development of the program on ice. It should still work with all 32-bit and 64-bit editions of the Microsoft Windows operating system though.