Garena is a computer games software for the Windows operating system that offers its users several community features on top of being able to simulate network play for computer games that are played over the Internet. It is in this regard quite similar to Hamachi with the differences that tens of thousand of gamers are connected to Garena at every time of the day and that the Pc games that can be played in Garena are limited to a handful of popular games.

Each user has to register an account with the Garena service to use the software. The software itself is divided into various rooms for the games which can be joined by the user. Each room is further divided into chat rooms of a maximum of 255 players each who can use community features like chat, private messaging or buddy-lists. 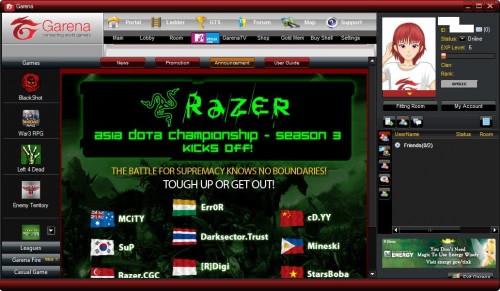 Games are started from these individual rooms by selecting the executable of the computer game on first start. Garena will remember the settings from then on and start the game automatically for you whenever you want to play the game.

Games can then be created and joined normally in the computer game that has been started (which is usually network play). Garena offers game leagues, clan creation, tournaments, a ladder and a client that is available in many different languages. The two main benefits of Garena are the community features and the network play (which removes the game key requirement for some games).

Update: Garena in recent time has expanded beyond the software by publishing games in select countries. The company most notable has published League of Legends and Heroes of Newerth in several Asian countries.