Itâ€™s not everyday you see a partnership like this. But taking into consideration the current economic times, the popularity of the netbook as well as Disneyâ€™s quest to control the digital lives of kids, an ASUS/Disney partnership doesnâ€™t seem too odd after all.

As the name suggest the Disney Netpal is a netbook designed specifically for children. According to Disney, the age range is between 6-12 years-old. The Netpal features an 8.9-inch LCD display, WiFi capabilities and Windowâ€™s XP Home â€œwith over 40 parental control options.â€ 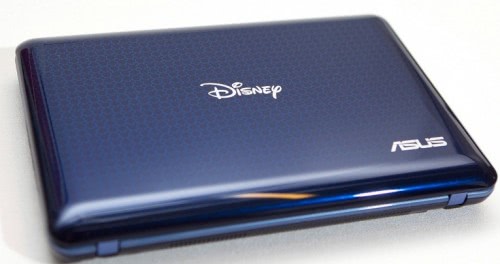 Since this is a netbook marketed to kids Disney took special note of durability. The device not only features a spill proof keyboard, but also ASUS ShockShield data protection which prevents loss of data should the device experience sudden shock such as a fall.

But what makes this little netbook shine is the work Disney has placed under the hood, geared to kids and parents alike. The Netpal features 10 customizable themes derived from popular Disney and Disney/Pixar franchises. These include, Cars, Club Penguin, Disney Classic Characters, Disney Fairies, Disney Princess, Vintage Mickey Mouse, Toy Story, WALL-E, Jonas Brothers and you guessed it Hanna Montana (whereâ€™s Lizzie McGuire?) Children will be able to use icons from these themes as email attachments such as signatures.

But Disney has gone even further with the inclusion of software built specifically for the Netpal. An example of this is the Disney Mix which, as the name suggest, is used for music and media management. There is also Disney Pix for photo customization/organization. One of the features of this application is the ability for kids to insert pictures of their faces into Bobblehead software. Another feature (via the Disney Radio Widget) allows children to stream real time music from Disney Radio as well as submit requests for songs. There are also a number of games included (racing, memory, scrapbook etc.)

So far everything that we just covered are things appealing to the kids, for the parents there are (as we mentioned earlier) over 40 control options so parents can protect their children as well as allow limited access to certain things.. For example a parent can pre-select email correspondences, determine which websites their children can visit, as well as a scheduling option so certain features can be automated such as the time of day the child is allowed to go online or play a game etc. And more importantly parents will be able to see not only what their children were doing on the computer but how long they spent.
All in all, this sounds like a perfect idea. While I do not have kids of my own, I have quite a few friends who would be interested in something like this for their son/daughter, and with a starting price of $350 this sounds pretty reasonable. As for a release date, that is set sometime in July