Archos has been known for making tablets for ages, but recently they have been turning heads with their talks about contributing something to the Android iniciative as well as working on a Windows 7 powered tablet. While the first is exciting in its own right, itâ€™s the latter that has really gotten my attention.

Modbook has been treating Apple users to tablet PCâ€™s for ages (mainly because of Appleâ€™s lack of plans to bring a tablet Mac to the market), but to be honest there has been no real players in the tablet Windows field. Most tablet computers have some type of keyboard attached and that makes them kind of bulky. The idea of having a tablet PC for use on the go is an amazing idea that Archos is just beginning to catch onto. 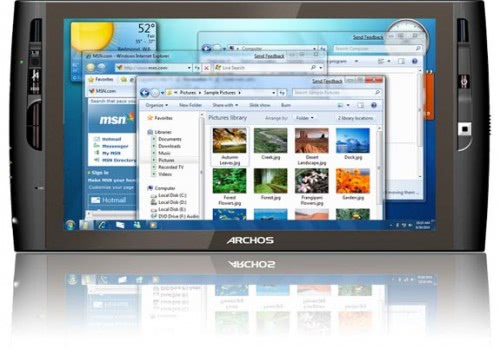 All the former models of the Archos line have been Linux powered and carried little to none productivity capabilities. That will all change when the Archos 9 Tablet goes on sale later this year in the UK (a US date is yet to be decided). A tablet like this would fit very nice into a carry on bag or handbag and could easily be used to check up on emails, weather, stocks as well as providing the whole entertainment pack while waiting for the bus, train, plane or any other situation where a keybaord is not practical and a cellphone is just too simple.

That said, the Archos 9 tablet features an 8.9-inch 1024x600 pixel resistive touchscreen display. While there have been rumors of multi touch support, that has not been confirmed by Archos as of yet and frankly from what I know, it seems pretty unlikely. The device is only 16mm inches thick and carries a host of features such as Bluetooth, 1GB of RAM, 802.11b/g WiFi, an 800MHz or 1.2GHz Atom Z515 processor as well as a SIM card slot for WLAN. Hard drive space is either an 80GB HDD or 160GB model. So far no word on an SSD option but as we all know that would be an arm and a leg.

So far from demos and FAQâ€™s the system seems pretty capable to run a stripped down version of Windows 7, but it would be a lot nicer if we could get a Core 2 Duo option. Iâ€™m sure Iâ€™m not the only one who would like to be able to play WoW on the go or test out Photoshop while miles in the sky. Secondly weâ€™re hearing that it will be fitted with the integrated graphics thingy from Intel. There is no need to go over the fact that NVIDIAâ€™s Ion platform would have been a much better choice.

According to Archos the device can be navigated pretty well VIA the touch of a finger but for some tasks the included stylus would be a better choice. For this reason I doubt it carries multi-touch.
Recently Archos released the pricing for the system. For the 80GB version it will run you Â£449.99 which is the equivalent of $735 USD. The doubled hard drive space (160GB) will run up the cost to Â£499.99 or the equivalent of $816 USD. The launch date is set for September. Thatâ€™s nice and all but this comes in direct conflict with the October 22nd launch of Windows 7. So unless Archos is cutting a special deal with Redmond, or that date is for pre-orders, we think someone at Archos French HQ has their facts wrong or itâ€™s a typo.

In any case, the idea of a full tablet PC without a keyboard that carries the processing power of a netbook is a nice one indeed. My only concern is if the price tag will be the biggest hurdle the Archos 9 has to jump.