Maxto is a software program for the Windows operating system that can divide all connected computer monitor screens into different areas that act independently from each other. The effect is that windows only get maximized in the area of the computer monitor that they are located in. This makes it far easier to align multiple program windows next to each other without having to adjust the window dimensions manually all the time.

One of the main advantages of Maxto is its multi-monitor support. After executing Maxto for the first time each of the computer monitors currently connected to the computer system become preyed out. This is the configuration phase of the application. The user can then divide each computer monitor screen horizontally or vertically numerous times until the desired partitioning has been defined. Each are can be manually adjusted by moving the dividing bars around. The actual computer monitor shines through which makes it easy for users who want to adjust the settings according to current window placements.

It is furthermore possible to load a monitor profile instead of configuring the areas of the computer monitor manually. Profiles exist that divide the computer monitor vertically or horizontally. The new areas become active once the preparations are done. Another option is to configure an alternate setup for the computer system which can be switched to easily. Perfect if you run two different kind of application sets that have different space requirements. 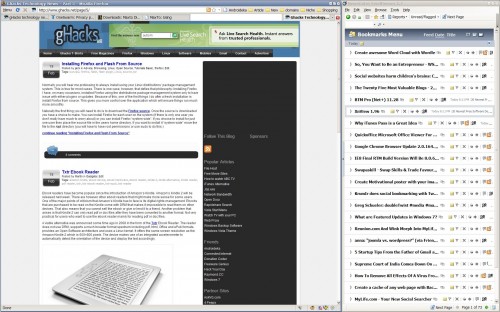 Keyboard shortcuts are available to move the windows into adjacent areas quickly, to maximize windows full screen or to enable the alternative layout.

The drawback of the application is its resource usage. While the application itself ships with a size of less than 200 Kilobytes it uses more than 30 Megabytes - and the same amount of virtual memory - while running on a computer system with one connected computer monitor. It should also be noted that Maxto requires the Microsoft .net Framework 2.0 or higher.

An alternative is Winsplit Revolution which is more resource friendly or Acer Vista Grid which despite the name works on both XP and Vista.