Update: The most recent version of the program is no longer available as a free version. You can download a trial version that is not time limited but limited to displaying ten devices. The size of the program jumped up to a size of between 4 and 5 Megabytes depending on which version of the application you download. 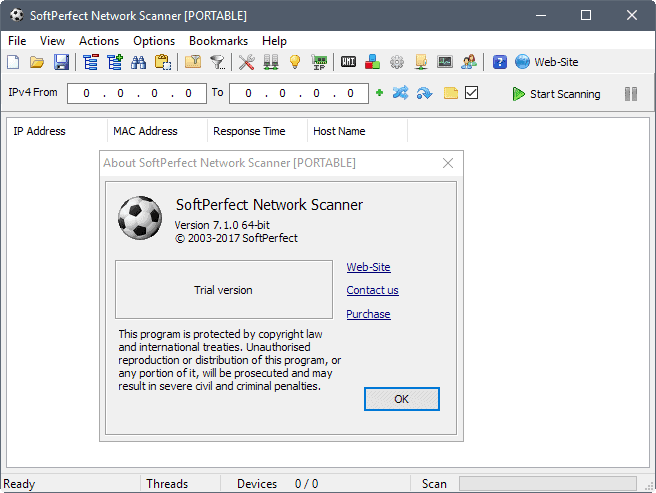 The program interface is clean, and accepts an IP range at the top. The default is IPv4 but the application supports iPv6 as well. You can enter it manually, or use paste operations instead. You may add more ranges to the scan during setup, and use auto-detection of local IP ranges, external IP addresses and IP ranges as well.

Some of the options are disabled by default and have to be enabled in the program's options. This is for example the case for MAC address detection and discovery of Open Ports. The ports have to be entered in a comma separated list, by default only port 80 is checked.

The network scanner has been designed to scan local and remote networks. Basically any IP range can be entered and Softperfect Network Scanner will scan it.

The network scanner supports additional features that make it interesting. I can launch third party applications that can be integrated into the software. It does support Wake-On-Lan and Remote Shutdown, can mount and explore network resources and list logged in users.

SoftPerfect Network Scanner is a powerful program for windows and Mac. The trial version is limited in regards to the number of devices that it will display during scans, but otherwise feature complete.

Martin Brinkmann is a journalist from Germany who founded Ghacks Technology News Back in 2005. He is passionate about all things tech and knows the Internet and computers like the back of his hand. You can follow Martin on Facebook or Twitter
View all posts by Martin Brinkmann →
Previous Post: « Microsoft Photosynth released
Next Post: Check For Broken Links on Websites »