You may remember that the news of the first Microsoft Photosynth prototype created a craze around the Internet. That was about a year ago. Microsoft has finally released a client version of Photosynth which combines browser plugins and a Photosynth software to create your own Synths using it.

Note: Microsoft announced in February 2017 that it shut down Microsoft Photosynth. Parts of the code are available in other Microsoft products, but a standalone program or service won't be supported anymore. Interested users can download the Photosynth plugin for Photoshop from Microsoft's website, and Photosynth from third-party sites such as Softpedia.

Surprisingly enough the browser plugin works not only in Internet Explorer but also in Firefox. I have not checked out if it is running in Opera as well but it could very well be. Photosynth combines sets of photos that depict an object to create a bigger picture with depth and the ability to explore.

That technique adds more detail to the pictures. Imagine a static picture. It can only display certain dimensions and fails to display all parts of the scene in the same detail. Photosynth steps in and creates a new "explorable" image by stitching together multiple photos of the same scene. 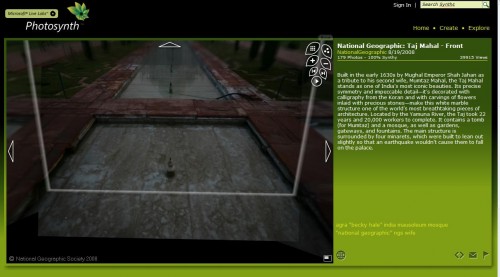 The Photosynth website has some great examples on their website, are you ready to explore the Sphinx, Taj Mahal, Eton College or a Night Skyline in greater detail than you ever did before?

The Photosynth software to create new Synths requires a Windows Live ID which is bit of a turn off. Creation loads the Photosynth page in Internet Explorer to create an account on the website

Users should also note that all synths will be uploaded to Photosynth and that all of them are made public for now. They also only work on computers running Windows XP or Windows Vista.

Once that is done a basic photo manager opens on the system that shows photo previews and lets the user select photos to synth. There are no options to chose other than picking the right photos that are somehow connected and pressing the Synth button.

The photos get processed and uploaded immediately. There is no way to stop the process once it is underway. Synth can be deleted on the website however. Here is the link to the synth that I have created. I only used a few photos because I could not find any more connected in my photo folder.

It's definitely a nice technique but there should be an option to create private synths and another option to view the offline.