A News Ticker For Your Desktop

RSS feeds are a great way of keeping up with your favorite blogs and sites that support the technology, as they offer several benefits over other means of monitoring a site for news and articles. Updates are more or less added in real-time to the feed reader, which makes RSS feeds a much faster method of staying up to date than email, website monitoring tools or checking a site manually multiple times throughout the day.

Most desktop and online feed readers display feeds in an email like interface. A few change that, for instance by displaying RSS feeds in full screen or as a Desktop Ticker.

The RSS news ticker TICKR displays RSS feed headlines in a small auto-updating bar at the top of the monitor. The program can load the BBC News feed as the default feed, a custom single feed, or a feed list in OPML format. Most online and desktop feed readers support the importing and exporting of feeds in this format, which means that it should not be a problem to import an existing feed list into the news ticker. 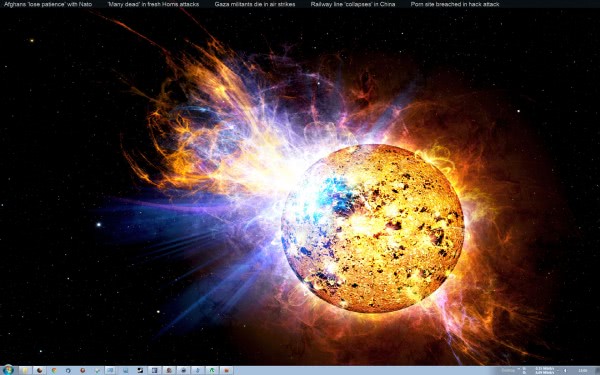 The preferences offer configuration options to customize the output. Here it is for instance possible to increase or decrease the speed of the ticker, change the default number of articles from five up to unlimited, modify font and color settings, or modify the position of the ticker on the screen.

The ticker window is set to be always on top, which may collide with open program windows. It is for instance difficulty to click on the minimize, maximize and close buttons of a full screen window when the ticker is running. This can be resolved by disabling the always on top settings. Another option would be to use a third party program like Desktop Coral to reserve the screen space the ticker is being displayed in.

The RSS news ticker displays only headlines by default, but it is possible to add descriptions to the ticker as well. A right-click on the ticker displays controls to pause, stop, slow down or speed up the ticker. These controls are also available as keyboard shortcuts.

TICKR is an Open Source program for Windows and Linux operating systems.