Rollgator offers an interesting service that could be very appealing to businesses and organizations. The online service creates full screen RSS feed tickers of up to four RSS feeds. These full screen ticker has been optimized for large displays that include computer monitors, flat screen televisions and even walls or projectors. Rollgator could be an interesting option in offices, at events or shops to display related news to employees and customers. It can naturally be also used on single computer systems which might be interesting to keep up with news without being at the computer system all the time.

An account is required to setup the RSS feed ticker at Rollgator. Only a few information including an email address, username, password and at least one RSS feed url need to be entered before the RSS ticker will be created. Additional RSS feeds can be added to combine multiple feeds in the ticker. Various templates are available to change the design and appearance of the ticker. Click here to check out a basic ticker that has been created using the Ghacks feed. 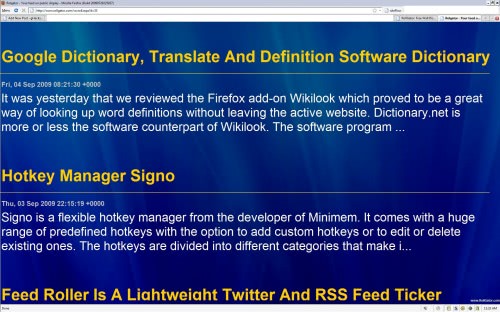 It is possible to add a banner text at the bottom of the screen which can contain custom text. Businesses and organizations would probably add their company's name there. There is enough space to add additional text that could include contact information.

Rollgator is a relative new services that has been made public yesterday. The developers plan to extend the service by adding possibilities to add video and image feeds, customizable templates, clock and news on the banner or iCalendar ICS aggregation.

Update: The Rollgator developers suggest to run the web browser, Internet Explorer or Firefox for instance, in Kiosk mode. These modes are bare bones mode that remove much of the user interface.