Microsoft released a PowerToys update this week that introduced a new program, called PowerRename, to the collection of utilities for Windows.

The company revived the PowerToys collection of programs in mid 2019 and released a first version to the public in September 2019. The initial version included just two utilities: FanzyZones and Shortcut Guide.

FancyZones applied a grid layout to the desktop to make working with windows easier, and Shortcut Guide a help file that revealed important shortcuts.

PowerToys 0.12.0 is now available. It can be downloaded from the official project website over on GitHub or installed/upgraded using Chocolatey.

The first thing that you may notice is that Microsoft signed the binaries and the installer in the new release. The new utility, called PowerRename, adds advanced rename options to the system's file manager. 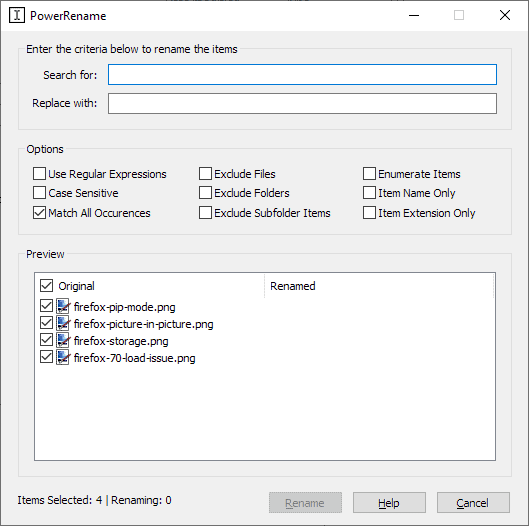 Just right-click on a selection of files or folders, and select PowerRename to open the program interface. PowerRename lists the selected files/folders in the interface and the criteria for the rename operation at the top.

PowerRename displays a preview of the renamed filenames so that you know exactly how they will look like when you hit the rename button. The tool displays the number of items that will be renamed and the total number of items in the interface as well.

It is certainly possible to remove characters from files without adding any. Replace adds the characters in the same location that the "search for" characters were at. 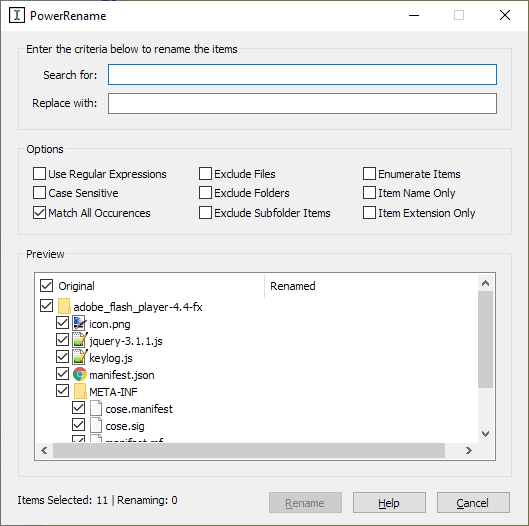 The options listing displays several optional settings, some of which apply only if you have selected folders.

Some options exclude each other; you cannot select item name only and item extension only at the same time. Once you are satisfied with the selection, hit the rename button to start the rename operation.

There is no visual feedback on completion; the PowerRename window closes when you hit rename. The only option to verify that the operation completed successfully is to open the folder the files/folders are in to verify that manually.

PowerRename is a handy new tool that improves the renaming capabilities of the Windows operating system. The tool is not as powerful as some of the third-party rename programs out there, e.g. Advanced Renamer, Bulk Rename Utility, Siren, or Ron's Renamer, it is sufficient for regular rename operations such as removing characters from a number of files or adding them to files.

Now you: do you use a program for rename operations?