The developers of VeraCrypt have released a hotfix for the recently released VeraCrypt 1.24 which we reviewed earlier this month. The hotfix addresses several issues in the client and improves certain functionality next to that.

VeraCrypt 1.24 was the first stable release of the encryption software in 2019. It added new functionality, updated libraries and fixed several issues in the client.

Tip: check out our in-depth review of the encryption software VeraCrypt here.

The VeraCrypt 1.24-Hotfix1 release fixes issues in the Windows, Linux and Mac OS X versions and introduces new features. Existing users may download the latest version from the project website to upgrade existing copies of the encryption software to the latest version.

Windows users can download and run an installer to upgrade installed versions of VeraCrypt or a portable version to replace previous portable versions. A restart is required on Windows to complete the upgrade. 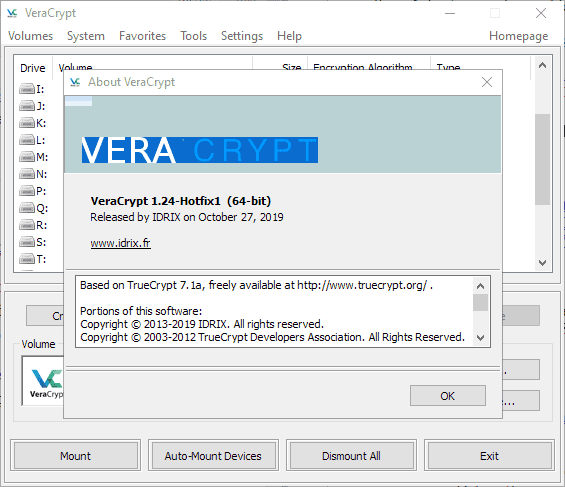 The VeraCrypt 1.24-Hotfix1 release notes list changes for Windows, Linux, and Mac OS X; every system gets a number of fixes and improvements.

The new version for Windows fixes a regression in VeraCrypt 1.24 that caused system favorites not to be mounted on fresh installs and an encryption issue that prevented the successful encryption of the system partition if the Windows username contained a non-ASCII Unicode character.

The remaining changes for Windows improve certain program functionality. The program's Expander feature, that allows users to expand a volume by adding new storage space to it, may now resume operations if the expanding is aborted before it is completed.

There is also a new Quick Expand option to speed up the expansion of large file containers, and new robustness and validation checks for system encryptions.

On Linux, a bug is fixed that saw VeraCrypt crash when the Whirlpool hash was used under CentOS 6. The new release fixes an incorrect password attempt written to /var/log/auth.log when mounting volumes and file drop issue. Additionally, the missing JitterEntropy implementation was added.

VeraCrypt for Mac OS X supports a dark mode and APFS file system for volume creations, and a fix for some devices and partitions not being displayed in the device selection dialog.

VeraCrypt 1.24-Hotfix1 is not a critical release that users should rush to install right away. Those affected by the mentioned bugs may want to install it asap. The new or improved features may also be of interest to some users.

Now you: which encryption software do you use?