Microsoft began the rollout phase of Windows 10 version 1809 on January 16, 2019 but restricted automatic updates via Windows Updates. Only devices that the company believed to have the "best update experience" would receive the update back then.

Administrators could run a manual check for updates and would receive the feature update then if no upgrade block was in place and if the device passed compatibility tests.

Microsoft lists one upgrade block currently on the official update history page of Windows 10 version 1809. Devices who run "certain new Intel display drivers" are blocked from receiving the update via Windows Update. The solution right now is to update Intel display drivers so that they are newer than 24.20.100.6345. 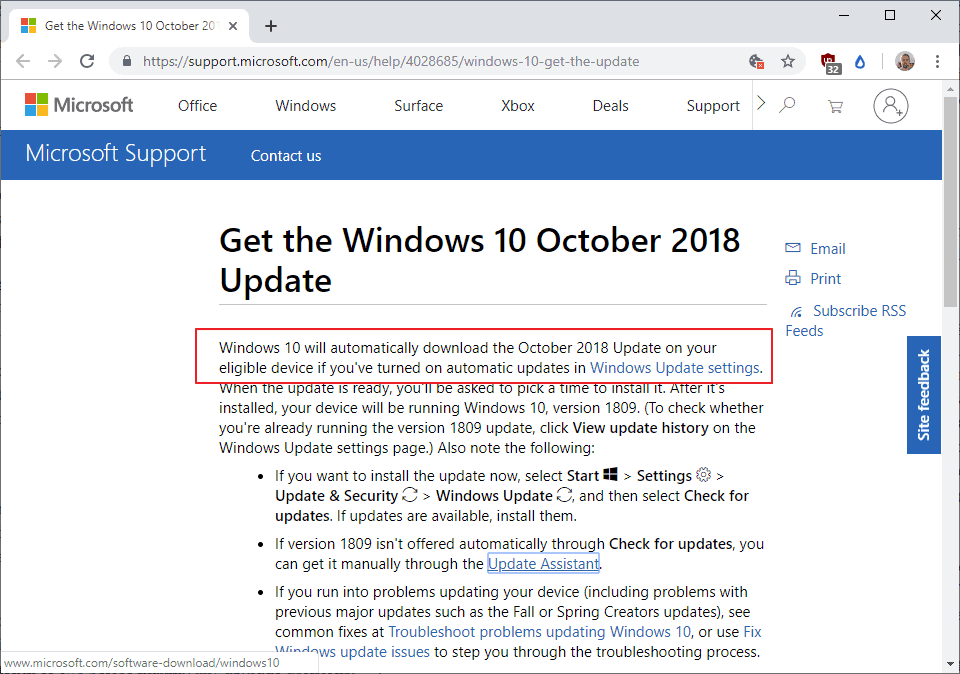 Microsoft updated the "Get the Windows 10 October 2018 Update" support page yesterday to indicate that the rollout of the new feature update for Windows has finally started.

Windows 10 devices will receive the feature update automatically now provided that they are compatible with the new version and don't meet any upgrade block that may still be in place; this is true for devices with Windows Updates set to download and install updates automatically.

Microsoft suggests that administrators run manual check for updates if the update is not offered automatically at this point. This is done by going to Settings > Update & Security > Windows Update, and activating the "check for updates" option on the page.

It is still possible that the feature update is not returned when administrators run manual check for updates. Administrators may then download the Update Assistant from this Microsoft page to use it to update (or receive information on why an update is not possible).

Article Name
Windows 10 1809: full rollout begins
Description
With Windows 10 version 1903 just a month or so away, it is quite puzzling that a large number of devices have not yet received the update to Windows 10 version 1809.
Author
Martin Brinkmann
Publisher
Ghacks Technology News
Logo

Martin Brinkmann is a journalist from Germany who founded Ghacks Technology News Back in 2005. He is passionate about all things tech and knows the Internet and computers like the back of his hand. You can follow Martin on Facebook or Twitter
View all posts by Martin Brinkmann →
Previous Post: « Windows 10 version 1903: new Windows Update policy
Next Post: Windows 10 version 1809 is ready for broad deployment »