You have a ping of several hundred milliseconds that puts you at a disadvantage against players with better pings? YouTube videos pause every other second or so because of buffering issues? Netflix streams do the same? Real-time communication services lag whenever you use them?

If those issues sound familiar, you may benefit from PingPlotter, a program for the Windows operating system that helps you analyze these issues.

Designed for system and network administrators, it may prove useful to home users as well as it may reveal bottlenecks or connection issues when run.

PingPlotter is offered in three different versions including a feature-limited free version. The universal installer installs the pro version by default which turns itself into the free version after a 30-day trial.

An option to switch to the free version directly is provided in the help menu. 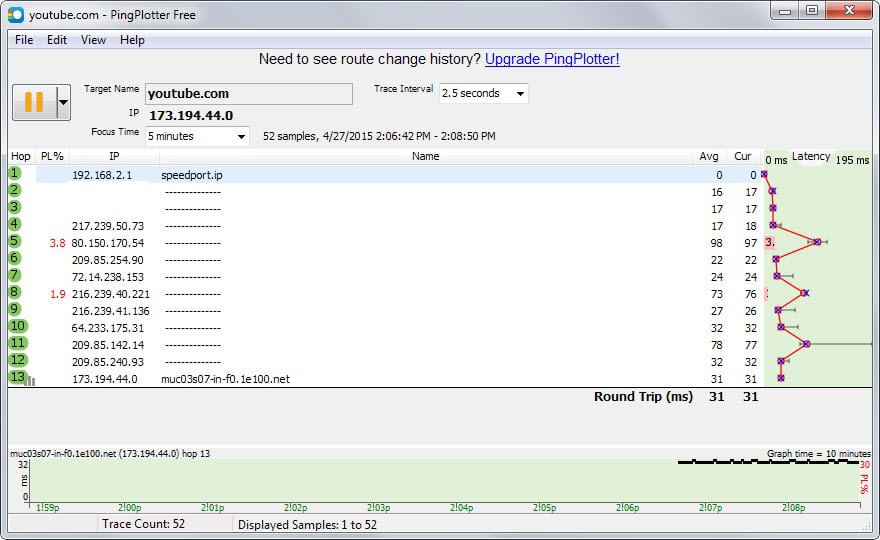 To use the program enter a target name or IP address in the toolbar at the top. PingPlotter starts to run network trace commands afterwards and displays its finding in real-time in the interface.

Bad values are highlighted in red in the interface. This is for instance the case if packet loss is detected.

The latency graph highlights the latency of each hop displaying average values, current values and limits on top of that.

Each hop is listed with its IP address and if available hostname. A graph at the bottom highlights the latency and other information such as packet loss over time.

PingPlotter runs traces every 2.5 seconds by default which you may change in the interface before you start the job.

The focus time defines the interval for which results are shown.

The free version of the application lacks features that the standard and professional versions offer. Both standard and pro version support testing multiple targets at once as well as advanced features that include customizing packet options, built-in whois queries and the tracking of route changes.

You could say that the free version is just displaying visual trace information but that would not be entirely fair as it analyzes and displays historic information on top of that in graphs.

You may have a hard time correcting issues that you may notice while running the application, especially as a home user.

A solid start is the list of common network problems that you can identify with the help of the software.  This includes how to identify wireless interference, bandwidth saturation or bad wiring/hardware.

Information can be saved as images which you can then attach to support emails or requests on the Internet.

The free version of PingPlotter is limited functionality-wise, there is no doubt about that. While that is the case, it can still be at times.