You can rely on the native uninstaller when it comes to the removal of installed programs on Windows or use a specialized product to make sure that leftovers are removed from the system which native installers don't remove usually.

I looked at three programs yesterday that don't monitor the installation but scan the system for leftovers after the removal. 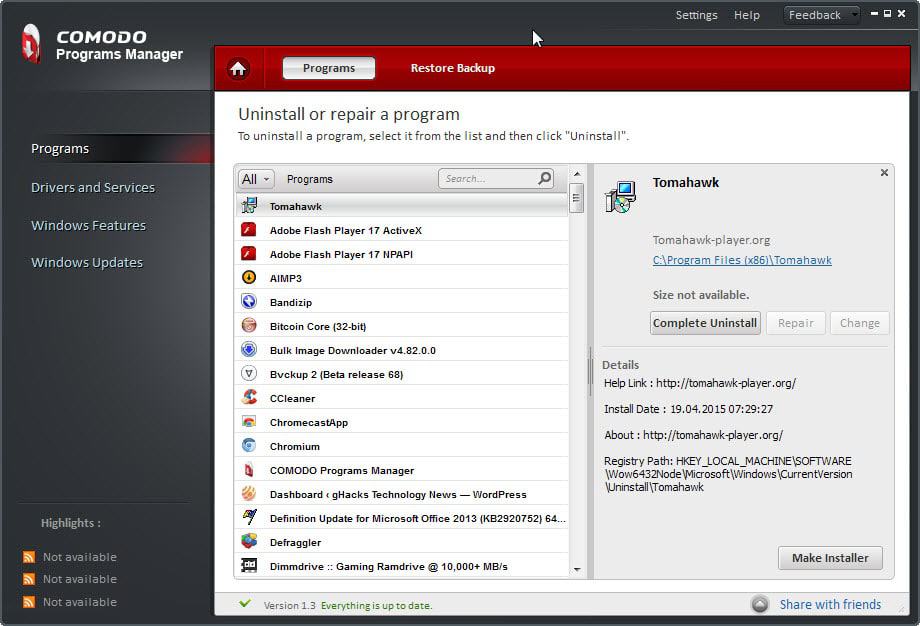 Comodo's Programs Manager adds installation monitoring to the process. The program monitors Software installations automatically if the program is running on the system at the time of installation.

The main benefit of this approach is that it is thorough as it records any file and Registry change on the system that happens during installation.

Instead of having to scan the system for leftovers, which can result in false positives or missed items, it simply consults its own log file as it lists all files and Registry items created during installation.

Note that the monitoring does not include files created after installation.

So how does it work in detail?

The installation of Comodo Programs Manager is a straightforward process. It requires you to reboot the system however before it can be run on it.

Once you run the program, it monitors installations automatically. You need to make sure that it is running at the time but that is the only prerequisite.

The status monitored is displayed next to programs indicating that a installation log has been recorded by Programs Manager.

It goes through the installation log afterwards to verify if all recorded files and Registry keys have been removed from the system.

All Registry items and files still on the system are then listed in its interface so that they can be removed as well. 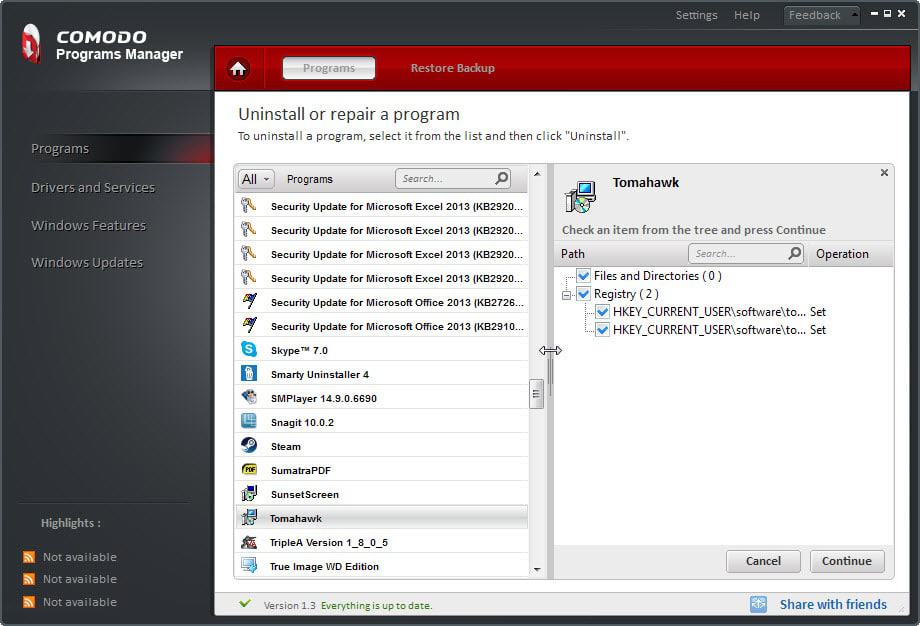 The process ensures that files and keys generated during installation are removed during uninstallation.

Any file or Registry item generated after installation however is not covered by this. If a program changes file associations for instance on first run, then those associations remain set after removing it with the help of Comodo Programs Manager provided that the native uninstaller does not remove them.

A scan of the Registry for leftovers after uninstallation may return results like the one below.

This means however that Programs Manager is not as thorough as it could be since it may not delete all leftover items of a program from the system after all.

In fact, programs like Revo Uninstaller may do a better job at that as they scan the system for leftovers and don't solely compare files to a installation log.

Programs Manager works best if the program that you want to remove from Windows has not made any modifications to the system after installation that are not covered by its own uninstallation routine. It works as well if you don't mind these leftovers or run a cleanup tool to get rid of those after the uninstallation process.

It works less well if modifications have been made as it will miss those which in turn means that these leftovers remain on the system.

Comodo should consider adding a leftover scan similar to the one found in Revo Uninstaller to its program to run scans for leftovers automatically after or during its own cleanup scan.

Comodo Programs Manager is a handy program to monitor the installation of software on the system. It is not as thorough as it could be as it removes only files and keys created during installation but not afterward.

It appears that Comodo ended development of the program. The last release version dates back to 2016 and the last version of Windows listed as supported is Windows 8. The program works fine on Windows 10 devices but since it is no longer maintained, you may want to consider switching to a different program such as IOBit's Uninstaller 8 or Revo Uninstaller which do a good job but don't support monitoring.