Many demoscene and warez group releases ship with .nfo files which contain information about the release as well as credits, messages and art.

A .nfo file can be opened in any plain text editor to read the information it contains. While that is the case, it won't display the art properly and may sometimes align text improperly as well.

That's where so called nfo readers come into play that display .nfo files correctly. These readers use the Terminal font to display the files the way they have been designed. The special thing about the font is that it offers patterns that can be combined to create the ASCII art displayed in those files.

It is interesting to note that .nfo files are mapped to the System Information tool on Windows systems (msinfo32.exe) which does not support plain text .nfo files at all and won't display them because of this.

GetDiz is a free .nfo file reader for Windows that has been designed specifically to display the contents of .nfo files correctly.

It works out of the box after you have installed the program on the system. 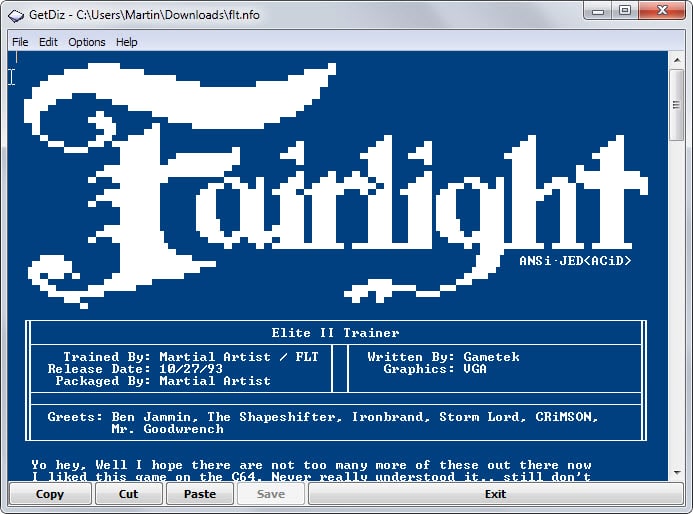 The only thing you may need to do is change the width and height of the program window so that the supported 80 characters are displayed in a single row.

The program displays the nfo files as white text on a dark blue background by default. You can change colors and various other features in the program options. Other options of interest include changing the font style, size and even the font type. The latter may distort the Ascii art of the file however and is generally not suggested unless the wrong font type is being used by default.

If it is locate Terminal from the list of fonts and select it to make sure everything is displayed properly.

GetDiz supports nfo files but also text, diz and ini files which you can load manually into the program or automatically by associating the file extensions with it. This can be done during installation or later on using Windows' control panel.

The application supports text editing which means that you can use it to create nfo files if you want or edit existing ones. The integrated ASCII table comes in handy for this especially if you are new to the art form as you can look up characters using it.

Content can be copied or saved, and there is even an option to save the file as a gif to the local system.

GetDiz is a great nfo viewer for Windows that works almost automatic out of the box. The customization options it offers are handy for users who only want to read nfo files on their system in the proper design.

Users who create or edit these file types on the other hand find a couple of helpful options as well ike the aforementioned ASCII character list.