And the new owner of Winamp is: Radionomy - gHacks Tech News
ghacks.net

And the new owner of Winamp is: Radionomy

It became known in November that AOL was planning to shut down Winamp, all services related to the player, and Shoutcast. The reason behind the decision was not made known by the company, and while AOL planned to shut down the service on December 20, 2013 initially, it did not happen on that day.

Techcrunch published a rumor on that day that AOL was in acquisition talks with an unnamed party, and while many thought that Microsoft would be that party, it seems to have been another company that no one seems to have had on the radar.

Radionomy is a free platform that you can use to create, discover and listen to online radio stations. In addition to that functionality, it also makes available tools to radio stations and producers to create, broadcast, promote and monetize their radio stations free of charge.

Considering that this matches quite well with Shoutcast, it is likely that Shoutcast was the main driving force behind the decision to acquire the Winamp brand and properties.

The new owners may decide to redirect Shoutcast to their own website, or, which is more likely, keep Shoutcast up and running and add links and their services to it instead.

You are probably wondering about the evidence that Radionomy is the new owner of Winamp and all properties associated with the brand. There has been no press release, no blog post, no official confirmation.

A user on the Winamp forum noticed however that the name servers point to radionomy now. You can check that yourself by visiting this page on the Whois website. 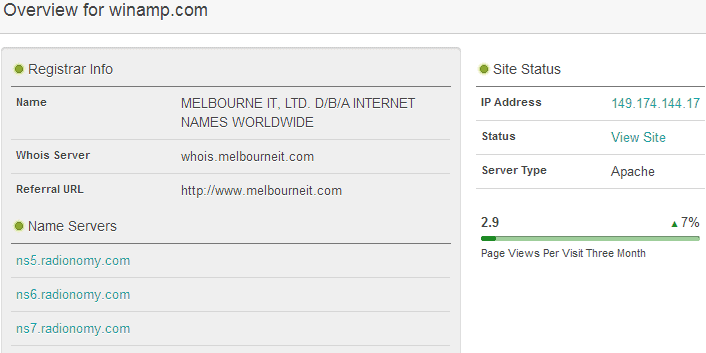 And what about shoutcast.com? It is still using AOL name servers.

It needs to be noted that this is evidence, but not fact yet. Other possible explanations include a successful hacking attempt, or that AOL just sold part of Winamp to Radionomy.

The Radionomy website launched to the public in April 2008. The name refers is a mix of radio and autonomy, fitting if you consider that it provides users with options to create their own online radio channels.

The company generates revenue through advertisement. While it is free to create online radio stations, they appear to be monetized by the company's own Adionomy service.

It is likely that an announcement will be made soon by AOL and / or Radionomy. What's unclear is if and how the Winamp media player will survive the deal.

We will update the article as soon as new information become available.

Update: According to Techcrunch, the deal will be finalized no latter than Friday this week. It is for Shoutcast and Winamp properties.