A first look at realPlayer Cloud 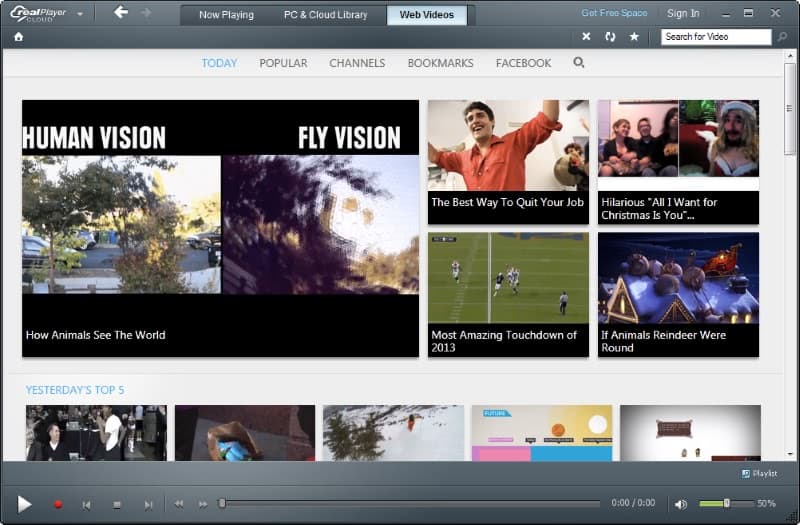 RealPlayer was one of the few major media players back in the good old days. It started back in 1995 and became quickly one of the  go-to players thanks to its Internet streaming capabilities.

Not only was it used as a standalone player, but its browser plugin made it a preferred choice for users who wanted to watch video on the Internet.

This changed when Adobe Flash became the dominating technology for that, and realPlayer's demise began. That was of course not the only reason for that. Some say that the program became bloated over time, and then there were other media players that eagerly stepped in.

Even though that is the case, the Real website, home to realPlayer, is still among the top 4000 websites in the world. To put this into perspective: Videolan.org, home of the VLC Media layer is listed as a top 2000 site.

Some time ago, Real Networks launched realPlayer Cloud, a new version of the media player with cloud connectivity.

The idea is to revive the player by introducing a feature that none of the other media players are offering: an option to privately share and stream videos among connected devices.

At its core, the media player still stands. It can still be used to manage the local library, download videos of the Internet, use its private watching mode (similar to private browsing, but for videos), or stream public web videos.

The cloud connection on the other hand aims to simplify the sharing of personal videos. While it is theoretically possible to do so the same on YouTube and many other video hosting services -- by creating a private channel and uploading the videos to it -- Real Network's solution aims to be simpler than that.

The company is providing access to mobile apps and desktop clients, as well as support for Roku TV set-top boxes that all can connect to the cloud to access the private library. Mac or Linux support is not there yet, but there is a workaround as contents can also be accessed directly on the Web using a web browser that is supported by the service.

New users get 2 Gigabytes of free storage space, which is as much as Dropbox users get when they sign up for an account. The available storage space is not much, considering that people will use it to upload videos to the cloud. Depending on resolution and quality, it may very well be good for only a single video, or a couple of them before it is filled up. Additional space can be earned by connecting devices to your account.

Paid accounts are available, with plans starting at $4.99 for 25 Gigabytes of storage space up to $30 for a whopping 300 Gigabytes.

Cloud hosted videos can be downloaded to any device for offline viewing, and it is also possible to share them with friends, family, or even all people that are in your social circles. It is interesting to note that recipients, that is people that you share videos with, do not need to run realPlayer to watch the videos.

As far as limitations go, videos that are shared to the cloud from a PC or a web browser are automatically limited to 15 minutes, while there is no such restriction for mobile device shares. This is likely done to discourage pirates from using the service, but could very well keep legitimate users from using the service as well.

When videos get uploaded, multiple versions of the video get created in the cloud. This is done to improve compatibility with devices, and likely also to speed up the streaming on select devices.

Real Networks comeback aims to take over the personal video space market. While not the only solution to do so, it is one of the easiest to configure and use.

You still have to cope with severe storage limitations as a free user -- something that you would not have if you would host your videos privately on sites like YouTube -- and are somewhat restricted in what you can store online due to the 15 minute limit for uploaded videos.

Previous Post: « Winamp not yet gone as acquisition becomes likely
Next Post: And the new owner of Winamp is: Radionomy »