by Martin Brinkmann on December 30, 2013 in Google Android - 1 comment

I usually have the Screen Rotation feature of my Samsung Galaxy Note II Android smartphone turned off, as I dislike it when it accidentally switches the orientation due to some false interpreted hand movements or software configuration.

Anyway, sometimes I encounter apps that require a different orientation from the one that I use by default. This can be a game that displays large black bars in the default mode, or any other kind of app that has been optimized for a different screen mode.

I usually turn on screen rotation in that case, rotate the screen, use the app, and turn off the feature again once I'm finished. That's not practicable as you may already have guessed.

Then I found Smart Rotator, and all the issues that I experienced in the past related to the device's screen mode were gone. 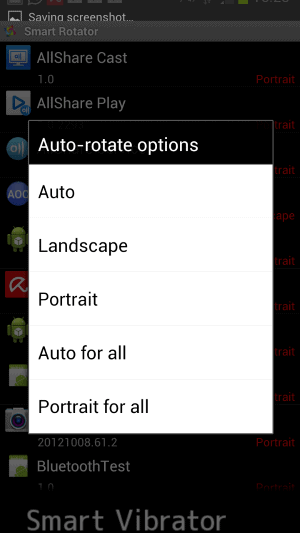 When you start the application, it displays a list of all installed or native Android apps installed on the device. For each app, its name, version and current screen orientation is displayed.

To change the orientation of individual apps, simply tap on them and select a new orientation mode from the list of available choices.

The first three options define the new orientation for the app. They can be landscape, portrait or auto, which basically sets the orientation automatically.

The remaining two options on the other hand change the orientation for all apps that you have installed. It can only be set to auto or portrait but not to landscape.

The application can be really helpful if you have disabled screen orientation on your device, but want some apps to open in landscape mode. This cannot be done by normal means, but Smart Rotator provides you with the means to do so.

While it did work with all apps that I tried it on, some reviewers noted that it did not work for some of the applications that they have tried the app with.

If you need to force a screen orientation on apps on your Android device, then Smart Rotator is the app to try to make this happen.  (via Techsupportalert)

Previous Post: « WebMD for Android is probably the best health app around
Next Post: Who goes first for Android picks the starting player for you »