Adblock Plus released for Google Android

The popular Adblock Plus ad blocking program has been ported to Android where it is now available on Google's Play store. The program does not require root, but its feature set may be limited if the smartphone is not rooted. The app blocks online advertising when you browse the Internet on your phone and when you run applications that display advertisement in their interface.

Adblock Plus for Android uses the same list-based system that the extensions use on the desktop. You are free to subscribe to one or multiple lists which allow you to block the majority of ads that you encounter while using your Android phone.

As mentioned earlier, the effectiveness of the solution depends on the version of Android and whether the device is rooted or not:

Please note that advertisement that is delivered via SSL connections is not blocked. This can be the case on websites that require you to connect via https for instance. 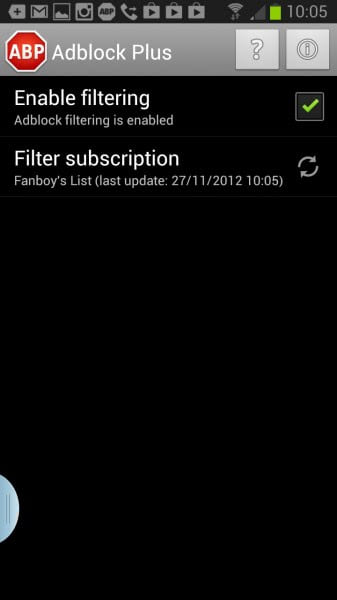 One of the lists is suggested automatically during first start with options to add other lists, some configured for users in specific countries like Germany or Netherlands in the settings.

The ad blocking should be automatic after installation and first run of the app on your Android device.

You may notice that Adblock Plus becomes the highest data-using app on your phone. According to the developers, that's because of the data filtering that other programs and apps request, not because of its "real" data requirements.

The application displays a notification icon constantly in the notification bar of the phone, which currently can't be disabled. There is also no option to whitelist sites or page elements using the application which should be implemented rather sooner than later as it may break some sites and blocks Internet users from rewarding sites that they want to support by keeping ads enabled on them.

I have tested Adblock Plus on my Samsung Galaxy Note 2 and it worked as advertised. Ads were blocked on the mobile version of Ghacks and several other websites that I opened in various system browsers.

Previous Post: « Moving to a new device? Don't lose your Angry Birds progress
Next Post: « The official Outlook.com Android app has been released