There isn't much question that Angry Birds has become a bit a of a worldwide phenomena. Rovio has seen incredible success from the five games in the franchise (six if you care to count Bad Piggies), but the games suffer from the same problem as almost every other mobile game. When you move to a new phone or tablet, which we seem to do more often these days, you lose all of your progress. Well, thanks to the Angry Birds success, a developer has actually spent the time to create and support a way to save your game progress.

Angry Birds Backup is not a new app, but many users likely never think to search for such a thing. If you do then there will be a couple of other options, but I prefer this one because it contains the ability to not only backup to an SD card, but also to the cloud via Dropbox.

The app doesn't require root access, so it's fairly simple for everyone to install and use. I prefer to back my games up to Dropbox so it is saved away from my device and will not be lost if the phone and it's installed SD card are lost or stolen. 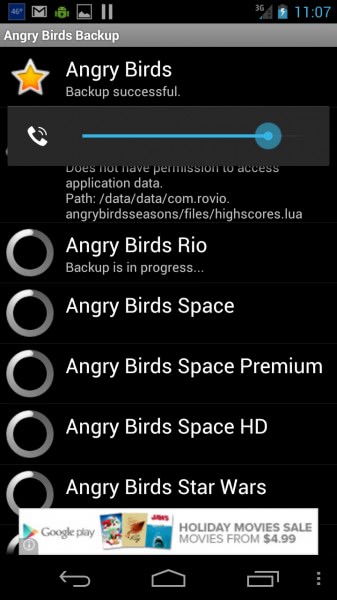 Tap the app icon and you will be greeted with a page containing several options -- you can backup to the SD card or link to your Dropbox account.

The app works quickly and easily, but does require you to log into your Dropbox account each time -- there is no way to save the login information as far as I could tell. It's simple to use and compatible with pretty much any device, given that it requires only Android 1.6 or higher. There is one quirk -- when I did a restore after switching phones a couple of months ago I found that it requires you to not only install each of your games first, but also play and beat one level of each before the restore can be done. Oh, and it's also free!

Previous Post: « Mute your Android phone with your hand
Next Post: « Adblock Plus released for Google Android