You've Got Mail: I just created an AOL Mail account

AOL, which was previously known as America Online, announced today that they have released an update for their mail service AOL Mail. According to AOL, that email service has 24 million users which may not look like much when compared to the hundreds of million Gmail, Hotmail or Yahoo Mail users, but it is still making AOL one of the largest mail providers on the planet.

I can't really compare the new design to the old, since I have never used it. To be frank, I did not really know that AOL was still offering its email service thinking that the company went full steam ahead with its tech acquisition strategy. As with every change, it is likely that part of the existing user base does not like it.

Still, when I opened my account after signing up I saw a well designed interface. It took a while to realize that AOL pushed me into the basic interface, and when I clicked on the link to switch to the standard interface I was welcomed with a message that told me that my browser wasÂ not supported. Now, I do not know if this was because of using NoScript, or because of using Firefox Nightly at that time. Still, a link was displayed that allowed me to keep the standard interface.

Here is the lite version screenshot, 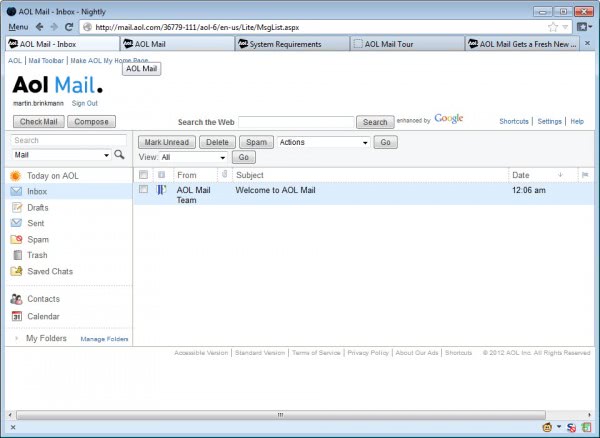 and here a screenshot of the standard version. 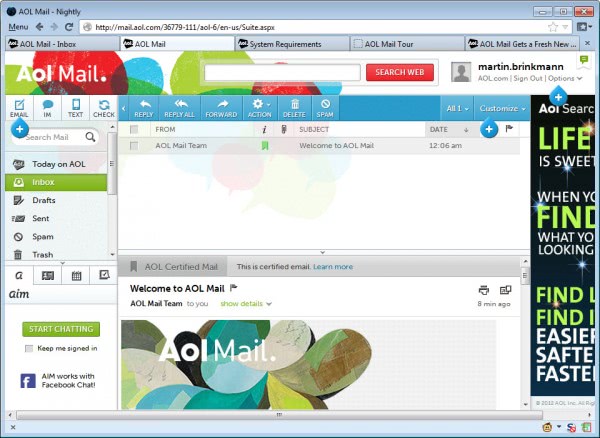 The lite version lists contacts and a calendar link, but not advanced features that only the standard version offers. You can for instance use the built-in chat to chat on AIM (which supports Facebook Chat), send text messages to any U.S. phone for free from your inbox, or customize the interface with different styles and themes.

If you do not like the fancy default theme you can switch to a number of themes, including classic AOL mail or a high contrast theme. 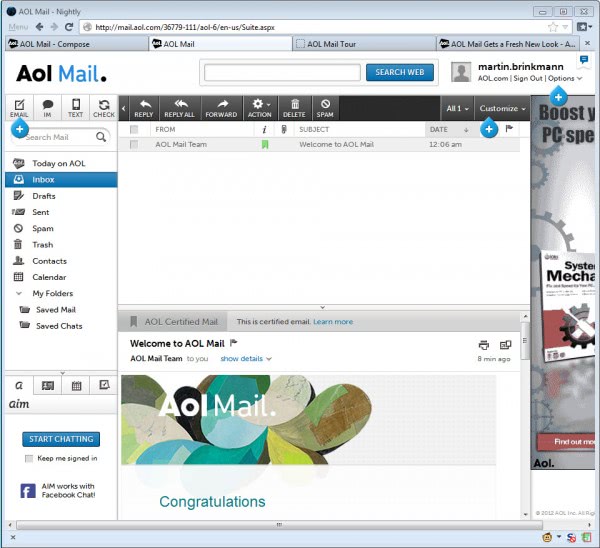 When you look behind the curtain you will notice that AOL Mail comes with a solid set of features. From IMAP and POP3 support and various spam filter settings to mobile clients for iPhone, Android and Blackberry, mail filters, alerts and options to transfer mails and contacts from other mail accounts to AOL.

And what about the classic AOL You've got mail message? It is unfortunately - or thankfully - not integrated into the program anymore. If you are too young to remember, here is the sound again that AOL played every time you received an email.

I have to admit that I like what I'm seeing with the exception of the Today on AOL folder that is displayed above your inbox and on the frontpage when you open the mail interface. It is too early to judge the mail client though, and I run a series of tests in the next couple weeks. To begin, I'd invite all of you - and the spammers out there - to write me emails to [email protected]

Are you a user of AOL Mail? If so, feel free to share your experience. You can read more about the relaunch in this press release or on the AOL Mail Tour site.