Zombie Last Night 2 is a free Flash-based game that can best be described as an arena shooter. The game is about defeating ever increasing hordes of zombies that try to take you down. The game throws you right into the action once you click on the play button after it has loaded in the web browser.

You start with a basic pistol, and need to survive for as long as you can. You use the WASD keys to move the survivor around, and the mouse to aim and shoot. Once you have more than one weapon at your disposal, you can switch between the three active weapons with the 1-3 keys on the keyboard.

The majority of zombies in the game try to attack you in melee combat, giving you ample time to react. Some use ranged attacks on the other hand, while others leave some sort of acid on the ground which you should not walk through if you value your health. 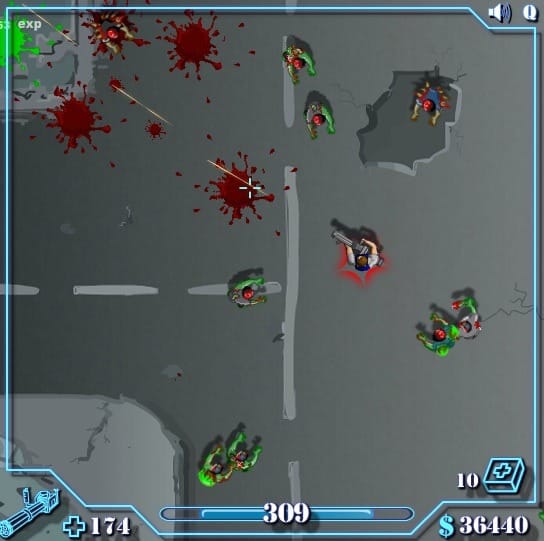 You can experience with each kill, and money after each completed wave. Skill points are awarded on level up, which you can then use to raise stats of the character. This ranges from faster movement or more damage, to earning additional money, or damage reduction. Each skill increase in the beginning costs one skill point. Later on, you spend multiple skill points to increase a skill further. 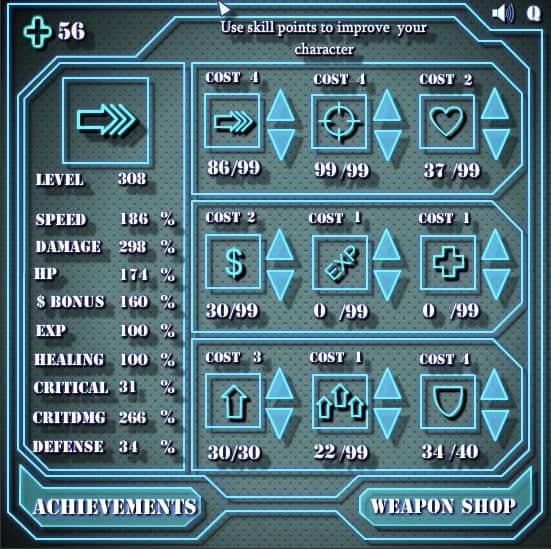 The selection depends a lot on your style of play. It may make sense to go all in on the money first, as you need it to buy better weapons in the weapon shop. Money alone won't get you far though, and it may be wiser to spend the skill points to increase the damage output instead.

You can buy up to ten med packs and weapons in the weapon shop. Keep in mind that you only have three slots at your disposal, which means that you won't have access to a weapon anymore once you replace it with a different one. 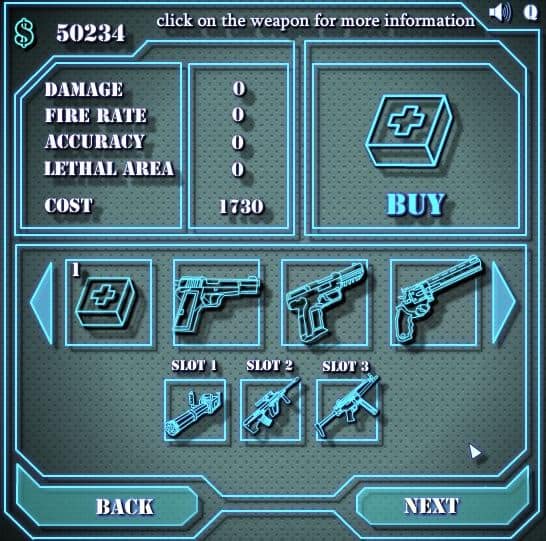 Weapons range from various hand guns to sub machine pistols, shotguns all the way up to the almighty minigun. The damage, fire rate, accuracy and lethal area stats for each weapon are displayed here as well.

Pro tip:  It makes sense to save money and use a weaker weapon for a longer time, so that you can buy a stronger weapon after a few more rounds of playing.

Once you have made your selection and all, you can pick a wave that you want to start in, or survival mode if you beat all waves the game threw at you. Waves need to be unlocked as well, which happens once you beat level 10, 20, 30 and 40 respectively.

The game is fun to play, at least for a while. Upgrading your characters skill points, the thrill of buying a new weapon, and the glorious feeling of unlocking new waves will entertain you for a while. The game does get repetitive in the end though, and the main reason for that is that it does not offer enough variety in game play. A change of scenario after unlocking a wave, a better zombie variety, and items on the ground (walls for instance) could have improved the game significantly.

Still, Zombie Last Night 2 is a fun to play game, especially on a rainy Saturday morning.