Tinysasters, or the Cycle of Life [Game Saturday]

Sometimes it is the small things that can make a big impact. When it comes to gaming, games that do not fall into the realistic mainstream graphics department come to mind. Small games can have lots of charm and exciting gameplay, if you can look beyond what you see on the screen.

Tinysasters is such a game. Designed for one of the Ludum Dare competitions in 48 hours, it is a game where you need to build your civilization and face disasters that roll in in regular intervals. It has a bit of Populous and Sim City in the mix, but adds its own twist to those genres. 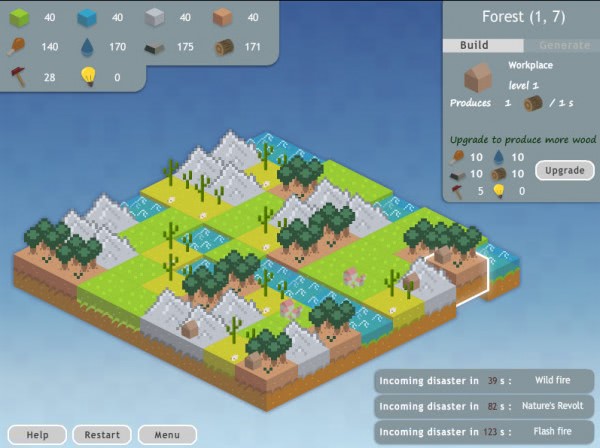 Your basic task in the game is to build up your civilization. You do that by building workplaces, cities and shrines on the 8x8 map. Workplaces create resources that you need to build additional buildings. If you place a workplace in a forest, it generates a certain amount of wood for you every second. The same is true when you place a workplace on a mountain, on grassland or on the water.

You can also build cities on the map, which produce crafts and tech, which are needed to build or upgrade buildings on the map. Shrines finally generate mana of the color of the tile they are build on. You can use mana to terraform the landscape. This is useful in the later stages of the game when you may end up without a tile type that you need.

Buildings can be upgraded two times, which improves their resource generation significantly, but at the same time makes it more difficulty to cope with the loss of the building and terrain when disaster strikes.

Disasters struck regularly on the map, ranging from earthquakes to fires or floods. Wild fires for instance have a 25% chance to affect forest tiles currently on the map, while volcanic eruptions a 30% chance to turn any mountain region into a desert. 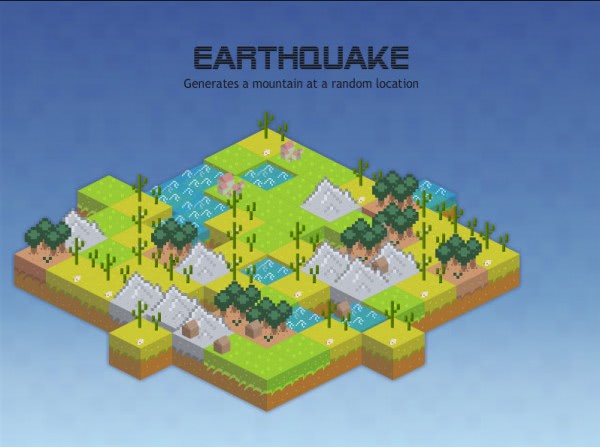 You will end up with lots of deserts in the long run, and need to use mana to transform the deserts back into regions that you can make use of.

The goal of the game is to build a level 4 shrine. That's the only level 4 building that you can build in the game. To be able to build that shrine, you need a level 3 city, and enough resources to do so.

Tinysasters ships with three difficulty levels, which change the intervals in which disasters happen on the land. You have about 40 seconds on easy between disasters, and only 15 or so on hard difficulty.

Tinysasters is a fun game for a short break. It is not that hard once you get the hang out of it, and are not too unlucky in regards to catastrophes.