What Is Google Music Labs?

Several Google products have so called labs sections which offer experimental features for those products. Probably the most popular product with a labs section is Google Mail, or Gmail, which at the time of writing offers dozens of features that users can enable for their email account. This ranges from integrating other Google products over preview options or new buttons that improve a user's workflow on the site.

Gmail is not the only Google product with a labs section though. The Google Chrome browser for instance lists technology previews and other features under chrome://flags/ in the web browser's interface.

Google Music is the latest Google product that has received a labs section. You can access the labs section on Google Music with a click on the settings icon next to the user profile in the Google bar, and the selection of  music labs from the context menu. (You can alternatively open the following url directly.) 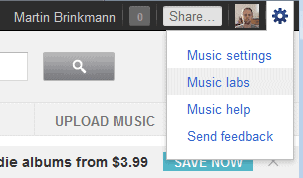 A total of three experimental features are currently listed on the Google Music labs page. It is likely that we will see new features added regularly in the future. 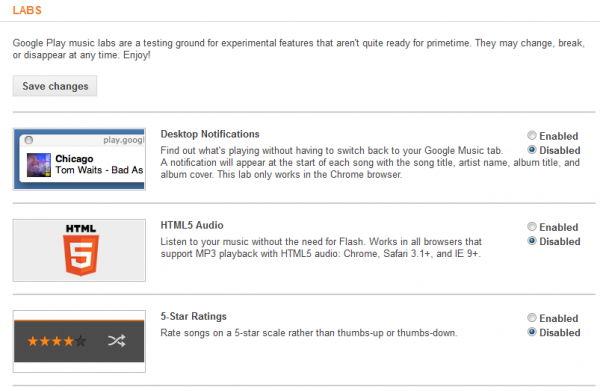 Find out what's playing without having to switch back to your Google music tab. A notification will appear at the start of each song with the song title, artist name, album title, and album cover. This lab only works in the Chrome browser.

Google Chrome displays a notification at the top when the feature is triggered for the first time. You need to allow play.google.com to show desktop notifications before you see them on the desktop when songs are switched.

Listen to your music without the need for Flash. Works in all browsers that support MP3 playback with HTML5 audio: Chrome, Safari 3.1+ and Internet Explorer 9+.

Rate songs on a 5-star scale rather than thumbs-up or thumbs-down.

Browser support is fairly limited right now for two of the three labs section features. Only the 5-star ratings feature is available for all modern browsers. HTML5 audio only works in Chrome, Safari and Internet Explorer, while desktop notifications only in Chrome and no other browser.

The introduction of a labs feature section could make the product more appealing to users who use experimental features in other Google products. (via Mike)