When you look at the most recent releases of the Thunderbird email client, you'd be hard pressed to find major new features that the developers have added to the program. If everything goes along as planned, this is soon going to change as Mozilla plans to integrate instant messaging capabilities into Thunderbird 13. That's three major versions from the current stable version Thunderbird 10, or roughly 14 weeks from today.

The goal of the project is to bring instant messaging communications into the email client. The developers plan to unify all contact information in one single place, enable the searching of emails and instant messages using the search feature, and keep track of links "between related emails and IM conversations".

An experimental version of Thunderbird has been released that is already supporting Facebook Chat, Google Talk, Twitter and Internet Relay Chat. The integration is not final yet, both feature and design wise but the core functionality is already usable in the latest test build. 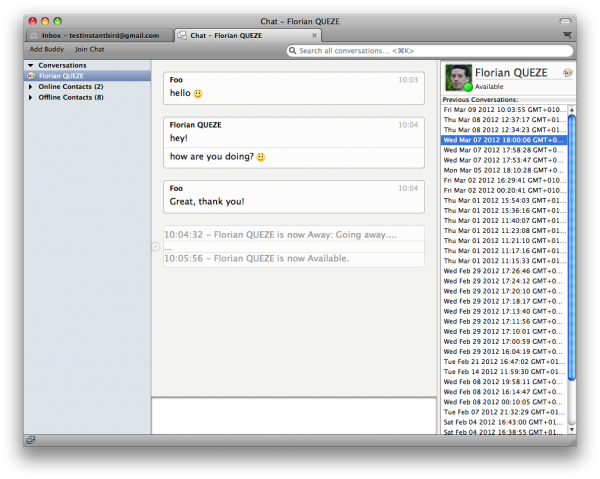 If you are interested in trying out the test build, download it from Bugzilla where it has been posted near the end of the thread. Keep in mind though that you should not install this in a productive environment.

Adding instant messaging capabilities to Thunderbird is a controversial move. Mozilla always saw Thunderbird as a messaging client, and this would extend the client's capabilities significantly in this regard. A deep integration of email and chat options, with a single contact database in the back-end, could provide users with new communication options. One would be to switch from sending an email to chat if the user is listed as available in one of the supported chat services.

Some users on the other hand may see the integration as clutter. It is not clear how the feature will be rolled out in a stable version of the email client. If it is fully optional, it should not be overly problematic.

What's your take on the instant messaging integration in Thunderbird? Good move, or a waste of resources? (via SÃ¶ren Hentzschel)

Previous Post: « Automatically Reduce Images Before Sending In Thunderbird
Next Post: « Gmail Reports Why Mails Have Been Rated As Spam